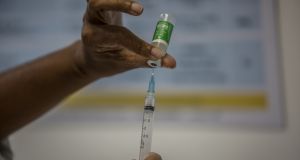 A healthcare worker prepares a dose of the AstraZeneca coronavirus vaccine at a health clinic in the Copacabana neighborhood of Rio de Janeiro, Brazil. Photograph: Dado Galdieri/Bloomberg

Switzerland has become the first European country not to authorise the AstraZeneca vaccine, as its medical regulator deemed there was insufficient data to reach firm conclusions on its efficacy.

“For the vaccine from AstraZeneca, the data available and evaluated to date are not yet sufficient for approval,” SwissMedic, the medicines authority of the non-EU country, said on Wednesday. “In order to obtain additional data on safety, efficacy and quality, data from new studies are required.”

The vaccine, which was developed by Oxford University and the British-Swedish pharmaceutical multinational, was recently authorised for use in the European Union by the European Medicines Agency.

The union expects to receive 40 million doses by the end of March, hundreds of thousands of which will be available for Ireland.

However, Germany, France, Italy, Poland and Sweden advised against its use for older people.

In Ireland, the National Immunisation Advisory Centre has advised that it would be preferential to give mRNA vaccines such as from Pfizer and Moderna to older age groups due to the limited number of those aged over 55 who took part in AstraZeneca’s stage three trial. It’s understood that the State is revising its vaccination plan as a result.

Only 341 people aged over 65 in AstraZeneca’s trial received the vaccine, and 319 were given a placebo, making some authorities deem that too little data is available to show the vaccine’s effectiveness in that age group with certainty.

In the EMA’s regulatory decision, it acknowledged a low level of data on its efficacy in older people, but said the balance of evidence supported approval for all age groups over 18.

The vaccine was the subject of a fierce row between AstraZeneca and the European Commission last week after the pharmaceutical company drastically cut its expected delivery schedule.

The AstraZeneca jab had been as a crucial part in European efforts to get control of the pandemic as it is by a long way the cheapest of all the vaccines the EU has ordered - with AstraZeneca supplying it on a cost basis only - and requires less intense refrigeration than the vaccines produced by Pfizer/ BioNTech and Moderna meaning it is easier for GPs to deliver.

AstraZeneca’s trial data is also being challenged in the United States, where a pension fund has launched a lawsuit on behalf of investors faulting the company for including too few older people, and for a mix-up in the trial in which some participants were accidentally only given a half-dose as one of their shots.