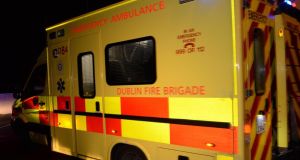 A review of emergency ambulance services in Dublin, looking at patient care and value for money, is to be conducted by Dublin City Council and the HSE.

A statement from both bodies said the review would be completed by the end of May.

It is to be conducted by former deputy Dublin city manager Derek Brady and former interim director of the HSE’s National Ambulance Service Martin Flaherty. Mr Brady is now county manager of Dún Laoghaire-Rathdown County Council and Mr Flaherty is managing director of the Association of UK Ambulance Chief Executives.

The emergency ambulance service is operated by Dublin Fire Brigade, under Dublin City Council, while outside the capital ambulances are operated by the National Ambulance Service under the HSE.

There have long been calls to amalgamate the Dublin Fire Brigade service into the ambulance service, amid claims that it could deliver the service for about €6 million.

While the National Ambulance Service employs 1,615 paramedics, there are 815 fire fighter paramedics in Dublin, operating 12 ambulances and 22 fire appliances which are also equipped to carry patients.

Different pay
Dublin paramedics also operate under different pay agreements and conditions to those with the HSE.

While there is no indication in yesterday’s statements from the HSE and Dublin City Council that amalgamation is the aim of the review, this was alluded to in concerns raised by Siptu’s industrial organiser for Dublin Fire Brigade, Brendan O’Brien, yesterday when he said: “I would be worried about the motives behind it and that this is really just a cost-cutting agenda.

He said, if anything, Dublin Fire Brigade required greater investment, adding it had had an increase of just one ambulance – from 11 to 12 – in over a decade in a time of significant population growth in the city.

“People aren’t dying in Dublin because ambulances are missing target response times. They are dying outside Dublin. Public representatives from Malin Head to Mizen Head are raising this issue.”

He said it was “inevitable” the review would recommend a cut in the number of paramedics in Dublin.