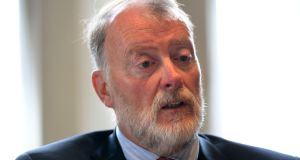 The way St John of God group chief executive John Pepper is paid by the order lacks clarity and transparency, according to the HSE audit.

In 2013, when the order decided to make compensation payments to senior executives in order to, it said, avoid future liabilities, Mr Pepper received the largest amount of €649,371.

HSE auditors say Mr Pepper, who is identified in the report only as employee #14, was paid a salary that was “very significantly in excess of the approved rate”. SJOG compensated him for the loss of additional, unapproved pay and future travel allowances to retirement, “contrary to public pay policy”.

At this point, the payment of his reduced salary transferred from the exchequer-funded payroll to the order’s private payroll. However, he remained on a public pension.

“Essentially, the salary of employee #14 has been, and continues to be, paid from a private entity whose payroll is deemed to be part of the public payroll for superannuation purposes.”

These arrangements are “opaque” and lack clarity and transparency, according to the report.

Mr Pepper has been on sick leave since late last year.

Meanwhile, an analysis of credit card statements between 2010 and 2016 showed total spending of €472,718, of which €330,552 related to flights, travel, restaurants, training, conferences and gifts. Alcohol, tips, gifts, donations and personal medication and vaccinations were claimed, in accordance with company policy.

The order said travel expenses related to the international role of SJOG services in the UK, Malawi, Zambia and, formerly, New Jersey in the US.

Foreign travel and Irish flights accounted for €124,797 of the spending, or about 25 per cent. The report lists 323 flights to 31 destinations taken by 12 of the 14 senior managers over the six-year period.

The list includes 62 flights to Newcastle, 42 flights to Rome, 37 to Leeds, 35 to London, 32 to Dublin, 24 to New York and 17 to unknown destinations. Mr Pepper claimed for 56 flights during the period, including 18 to New York.

Among the expenses claimed for were an €80 clamping fine, a total of €565 for alcohol with meals, mileage for funerals, and medication and vaccination expenses.

Internal audit could not calculate mileage on some claims as no starting point was given for the trip. It was unable to verify Mr Pepper’s journeys as the handwriting was “illegible”.

Last December, St John of God notified the HSE of 83 “anomalies” involving previously unidentified allowances. This included a bus escort allowance of €7 a journey paid in the Liffey region to staff for agreeing to transport service uses to day services.

Other anomalies included an on-call allowance for social care staff, a nurse-in-charge allowance and an extra responsibility allowance paid to three staff. Services users working for the charity were also paid an hourly rate, though there were not regarded as employees.