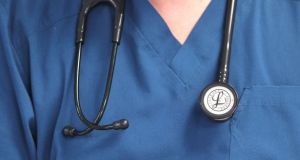 ‘These are ordinary people in ordinary jobs who never went into their professions to be regulated in this way,’ INMO says. Photograph: Lynne Cameron/PA Wire

The prospect of appearing at disciplinary hearings can render nurses “suicidal” due to the publicity involved, an Oireachtas committee has heard.

Representatives of the Irish Nurses and Midwives Organisation (INMO) criticised the “toxic” coverage of professional fitness to practise hearings in the media.

The coverage of such hearings was often difficult, pervasive, selective and often toxic, Martina Harkin-Kelly, president of the INMO, told the Oireachtas Health Committee.

She said nurses and other healthcare professionals experience severe anxiety over the way disclosures of adverse incidents were made and the consequence of these disclosures.

“Our members face the potential of losing their licence to practise nursing and midwifery, consequently losing their career and livelihood, and moreover facing a public inquiry with associated difficult, pervasive, yet selective and at time toxic media coverage,” she said.

Edward Mathews, director of regulation and social policy of the INMO, spoke of the “sheer fear” his members felt on receiving a letter from the Nursing and Midwifery Board and said some were “suicidal” about appearing before a hearing.

“These are ordinary people in ordinary jobs who never went into their professions to be regulated in this way,” he said.

Responding to the union’s remarks, the Nursing and Midwifery Board of Ireland said it was very aware of how stressful it can be for a nurse or midwife to appear at an inquiry. The board always tried to be considerate of this stress, it added, pointing out that one-third in hearings last year were held in private.

The committee was conducting pre-legislative scrutiny on the open disclosure provisions contained in the Civil Liability (Amendment) Bill.

Representatives of the INMO, Irish Medical Organisation (IMO) and Irish Hospital Consultants Association supported the introduction of open disclosure provisions, but pointed out that many adverse incidents are the result of systemic issues, often caused by the health system being over-stretched.

Dr John Duddy, president of the IMO, pointed out that different standards were applied to doctors acting as managers compared to professional managers, because clinical staff could be subject to disciplinary proceedings where adverse events occurred.

Later, the Irish Patients Association called for the introduction of mandatory open disclosure of adverse incidents occurring in the health service.