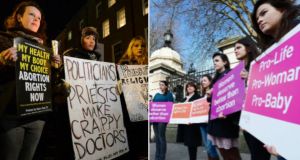 Groups on both side of the abortion debate have expressed their concerns over the Heads of the Bill for the Protection of Life During Pregnancy. Photographs: Alan Betson/The Irish Times

Groups on both side of the abortion debate have expressed their concerns over the Heads of the Bill for the Protection of Life During Pregnancy 2013.

David Quinn, director of the Iona Institute, a religious advocacy group which opposes abortion, said the organisation was “very concerned” at what was contained in the heads of the Bill, particularly in relation to the provision on suicide which he said, if implemented, would see Irish law “crossing a moral Rubicon”.

“The suicide provision is the most worrying provision in it because, if and when this becomes law, for the first time in Ireland, it will provide for the direct killing of an unborn child where there is an alternative treatment,” he said.

Mr Quinn reiterated the organisation’s contention that suicide was not a cure for suicidal ideation, a viewpoint which he said had been supported by 113 Irish psychiatrists who last week signed a statement indicating their opposition to suicidality as grounds for an abortion.

He said the organisation would also be reviewing the part of the Bill which deals with conscientious objection as to what implications this had for Catholic hospitals.

Anti-abortion organisation the Life Institute accused Fine Gael of “caving in” to Labour on abortion. Spokeswoman Niamh Uí Bhriain said the smaller Coalition party represented “less than 10 per cent of the people now, according to polls, yet they are deciding for the whole country on this issue of life and death”.

She said the Government “had ignored all the medical evidence that confirmed abortion was not a treatment for suicide”.

“This Government asked medical experts to give evidence on this issue, and the evidence they heard demolished the case for legalising abortion on suicide grounds, but now they have roundly ignored the evidence and moved to allow unborn children to be deliberately killed for the first time in Ireland.”

Although pro-choice groups welcomed the publishing of the heads of the Bill, they also expressed concern at some of the elements therein.

The Abortion Rights Campaign welcomed the publication as a step toward securing access to safe and legal abortion in Ireland but added that it was “deeply disappointed” by several sections of the draft legislation.

Spokeswoman Cathie Doherty said the campaign was “extremely alarmed” by the inclusion of the assessment of three doctors for termination when a woman is at risk of suicide.

“Requiring three doctors to assess a suicidal pregnant woman is outrageous. This legislation will be redundant if the women affected will continue to travel to England rather than face interrogation by multiple doctors,” she said.

The organisation also labelled a possible penalty of 14 years in prison for illegal abortion in Ireland as “nothing short of barbaric”.

“To threaten women facing this difficult decision with imprisonment is not only wrong in and of itself, but it may prevent women from disclosing information about previous abortion to their doctors, or seeking medical care in the event of complications from illegal abortion,” said another spokeswoman, Sarah Malone.

Sinead Kennedy of Action on X said the organisation was “very disappointed” by elements of the Bill, particularly around suicidal ideation. She criticised the requirement for a suicidal woman or girl to receive the unanimous consent of three medical practitioners before an abortion could take place in these circumstances, describing it as a “callous disregard for women’s lives”.