The outcome of this week’s meeting in Clare will influence whether a group of doctors will run a general election candidate. 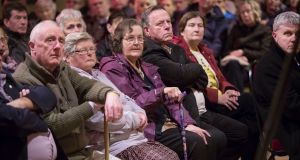 Residents of Bansha, Co Tipperary, pack their local community hall at a public meeting in November. They are concerned that a GP vacancy be filled. Photograph: John D Kelly

The Health Service Executive has reinstated allowances in a bid to fill a rural GP post in Bansha, Co Tipperary, even though the post was originally advertised without them.

Locals had been concerned the village and surrounding districts could be left without a GP once the holder of the office retires.

No applications were received after the position was advertised last September without an annual allowance which for rural GPs can be up to €16,000, plus payments to cover the cost of a secretary and a nurse.

Locals said they were “surprised and delighted” the job had been re-advertised on better conditions just before Christmas, though GPs warn that rural practices are not viable without such support.

“I was delighted to hear the Bansha allowance was restored but it should never have been taken away in the first place,” said Dr Liam Glynn, who is helping to organise a meeting of Co Clare doctors later this week.

Despite charges from campaigners that rural GP numbers are falling, the HSE argues the number employed has risen from 2,000 in 2009 to 2,400 last year.

The outcome of this week’s meeting in Clare will influence whether a group of doctors concerned about the effect of spending cuts on rural GP services will run a general election candidate.

Dr McGarry said a “mapping” report from the HSE to get clear analysis of what was required nationwide was due before Christmas, but it was delayed. “They are the crux of the negotiations,” he said.

Most trainee GPs want to work in Ireland but “uncertainty” is driving them overseas. “With a properly resourced contract negotiated, it could attract a lot of GPs back.” The existing workload is unsustainable, he added.