Row over fees set to delay vaccinations for newborn babies 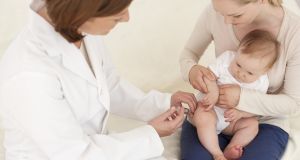 The Department of Health and the HSE plan to add two new vaccines to be given by GPs to all children born after October 1st, 2016.

The introduction of two new vaccinations for newborn babies is being delayed by a row over fees.

The Irish Medical Organisation (IMO) has warned that the Department of Health is going to miss the December 1st deadline for the planned expansion of the childhood vaccination scheme.

From next month, the department and the HSE plan to add two new vaccines to be given by GPs to all children born after October 1st, 2016. The additional vaccines are for meningococcal B (MenB) and rotavirus.

Ireland has the highest rate of invasive meningococcal disease in Europe, and MenB disease is the major cause of these infections which can cause severe illness and death.

Rotavirus disease is the most common cause of gastroenteritis in children and results in 1,000 hospital admissions each year. Both vaccines are widely used internationally and have a proven effectiveness.

Dr Austin Byrne of the GP committee of the IMO said the failure of the department to plan for the introduction of the vaccines on schedule was “deeply regrettable”.

“Following early discussions with the IMO, the department and the HSE have simply disengaged in the past number of weeks, leaving GPs, and more importantly parents of newborns, at a loss as to what is happening,” Dr Byrne said.

“This really is a disgrace. There is a lot of talk about new contracts and health reform but we fear, if this is to be the level of engagement, that is all it is: talk.”

A second GP organisation, the National Association of General Practitioners, has written to Minister for Health seeking access to the negotiations. The group said it was disappointed at the potential delay in the vaccination programme.

The HSE said in a statement that a timely roll-out of the programme would take place once the matter of a fee for GPs is resolved.