Research follows over 1.6m Swedish men from adolescence between 1968 and 2005 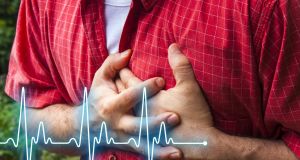 One limitation of the study is that it is applicable to men only. Photograph: Getty Images

How much you weigh as a teenager is linked to your risk of heart failure in early middle age, a new study suggests.

Those who were overweight as teenagers were more likely to develop heart failure in early middle age, according to research that followed more than 1.6 million Swedish men from adolescence onwards between 1968 and 2005.

The increased risk of heart failure was found in men who were within the normal body weight range in adolescence, starting in those with a body-mass index (BMI) of 20 and rising steeply to a near 10-fold increased risk in those who were very obese.

The study, published in the European Heart Journal, found that in men with a BMI of 20 and over, the risk of heart failure increased by 16 per cent with every BMI unit, after adjustments for factors that could affect the findings.

Annika Rosengren, professor of medicine at the Sahlgrenska Academy in Gothenburg, who led the research, said it was surprising to see the very steep increase in risk with increasing body weight above a BMI of 20.

The reason the risk of heart failure starts at a fairly low level of BMI may be because normal weight is normally defined at between 18.5 and 25 BMI when this was probably not an appropriate definition in the young, most of whom are naturally thin, she said.

She said the findings suggested heart failure may become a major threat to health worldwide and thereby served to underline the need for action.

“Action needs to be taken by governments as well as by individuals, for instance by creating an environment that does not promote overweight and obesity, and that encourages people not to be sedentary and not to eat more than they need. This is more important than hassling people into dieting whatever shape they are.”

The study is based on the analysis of Swedish conscripts between 1968 and 2005; until recently, Swedish law required all 18-year-old Swedish men to enlist in the armed forces.

The researchers say their findings suggest that preventive action needs to be taken earlier in life.

“The overwhelming majority of young people have an extremely low risk and so are not in need of preventive measures on an individual basis, except for firm anti-smoking advice,” said Prof Rosengren.

“However, our findings show the importance of body weight in adolescence and suggest that more emphasis should be placed on the maintenance of a healthy body weight from an early age as a preventive measure.”

One limitation of the study is that it is applicable to men only.