Over a million tests to be destroyed; Could save family of SAD victims, IHF 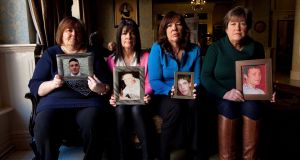 The Irish Heart Foundation today launched a national campaign to has called for a halt to the destruction of newborn screening card blood samples which could save the lives of extended family members of more than 1,000 young victims of Sudden Cardiac Death. Pictured are mothers from the SADs support group with photos of their deceased sons: Monica Martinfrom Rialto (who lost her son Connor, aged 16, in 2005) , Eileen Nevinfrom Clondalkin (who lost her son Stephen, aged 18, in 2007) , Sally Hegarty from Rathfarnham (who lost her son Rory, aged 16, in 2009) and Maureen KellyChair of the SADS Support Group (who lost her son Daragh, aged 21, in 2003) . Photograph: Leon Farrell / Photocall Ireland

Families and young people have been urged to request newborn blood samples held by the State, before over a million of them are destroyed after March 31st.

The Irish Heart Foundation also called for the planned destruction of the heelprick sample cards for infants born between 1984 and 2002, by the Health Service Executive (HSE) to be halted.

A genetic diagnosis using the samples could help to save the lives of the extended family members of over 1,000 young people born over the 18 year period who died from sudden cardiac death, the foundation said.

Blood samples could in future identify an underlying genetic abnormality so that family members of those who died could themselves be detected and take steps to avoid risk factors like avoiding sports or certain medication, cardiologist and chair of the IHF’s sudden cardiac death council Dr Joe Galvin said.

The foundation also raised concern about lack of awareness of the Easter Sunday deadline for requesting the card. A Red C Poll conducted for the IHF found that 12 per cent of adults were aware of the plans . “Inaction” in the face of a life or death issue for thousands “has to be challenged” IHF chief executive Barry Dempsey said.

The HSE said it had received about 1,000 request forms to date. Notices were placed in six national newspapers in January, a press release was issued and the topic was “widley covered” in the media, the HSE said. The HSE infoline received some 200 phone calls on the issue since January, it said.

Minister for Health James Reilly was “seeking information from the HSE as to the effectiveness of their campaign to ensure people have been adequately informed about their rights,” the Department said in a statement. “No material will be destroyed before all requests have been processed,” it said.

The HSE intends to destroy the screening cards on foot of a ruling in 2009 from the Data Protection Commissioner that its retention of cards breached regulations.

The Government made the final decision to destroy the cards last year on the recommendation of a HSE expert group . There is “no written consent from parents for the retention or use of these newborn screening cards taken between 1984 and 2002 for research, or other, purposes,” the Department of Health said in a statement .

The National Newborn Bloodspot Screening Programme has been used in the State since 1966 to screen for rare genetic diseases. Sampled are stored at Temple Street hospital but most before 1984 were destroyed by water contamination. Parents have had the right to opt out of the test since a 2001 and since 2011 parents have been asked for consent to take the samples.

It would be possible to deal with data protection requirements and to the need to protect blood samples of young sudden cardiac death victims in the forthcoming Human Tissue Bill, Mr Dempsey said. “It appears no serious consideration has been given to the possibility,” he said.

Gene mutation was critical to a diagnosis for sudden cardiac deathbut “there are usually no blood or tissue samples left from the deceased” Dr Galvin said. A 2010 New Zealand study showed the diagnosis could be made with Guthrie cards where there is no other blood or tissue, he said. Genetics had moved into the “clinical mainstream” he said.

Dr Galvin said there were many other reasons to hold onto the cards including potential population genetics.

In a letter to the Irish Times in January Trinity College Dublin professor of genetics David McConnell described the move as “the modern equivalent of burning the Customs House.”

Cards can be requested by a parent or the infant screened if they are over 18. An application form can be downloaded from newbornscreening.ie or people can call 1850 24 1850.

Dublin mother Sally Hegarty has requested the screening card for her son Rory who died suddenly in his sleep in 2009, most likely of Sudden Arrhythmic Death Syndrome (SADs which is sudden cardiac death in people over a year old). As a member of the Irish Heart Foundation’s SADs support group she has urged parents to ensure their child’s newborn screening card is not destroyed.

She described the “worst day” of her life when she entered her son’s bedroom February 23rd 2009 to call him for school. “When I entered his bedroom I knew something was wrong. He looked so peaceful but he wasn’t reacting. When I touched him he was cold and I started screaming,” she said.

“We do not know the reason Rory died. His post mortem was inconclusive. Structurally his heart was perfect. We have been told Rory most likely died of SADS,” she said.

Ms Hegarty is worried that her children Sadhbh and Neil may have inherited the condition. They attended heart screening every year and tests have been negative but she still is concerned.

“I have been assured my children are low risk. But his is poor comfort to me – I don’t want any risk” she said.

The newborn screening card holds the “only DNA” she has of her late son and she hopes that in the future through genetic testing “experts will be able to isolate the faulty gene” so her children “ can be tested to prove they have not inherited this gene”.

Ms Hegarty said she was telling her story so more families like her could have “hope for an answer” and a diagnosis one day.

“Protecting the newborn screening cards is vital, we cannot let them be destroyed,” she said.