Pregnant women are not getting vaccines over ‘baseless’ concerns 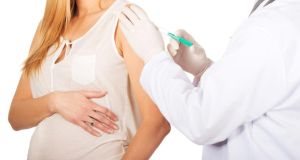 Unfounded concerns about vaccine safety are widespread among pregnant women, according to a survey of patients at the Rotunda Hospital. Photograph: Getty Images

Up to 40 per cent of Irish health professionals say they lack the confidence to recommend vaccines to pregnant women due to safety concerns, a survey has found.

This is despite the fact the vaccines to protect against flu and whooping cough are safe and are recommended by the HSE for women who are pregnant.

Unfounded concerns about vaccine safety are also rife among pregnant women, according to a separate survey of patients at the Rotunda Hospital, with up to one-quarter saying they were discouraged from getting the jab by worries about the risks involved.

“The risks are huge. If you interfere with pregnancy you’re asking for trouble,” one mother told researchers from the hospital.

They concluded that work is needed to stress the safety, and not just the benefits, of vaccines for mothers and their babies.

Some 38 per cent of those surveyed expressed a lack of confidence in the whooping cough (pertussis) vaccine due to safety concerns.

The HSE provides the flu vaccine free for all expecting mothers, but does not fund its administration.

Women attending antenatal clinics in maternity units are generally advised to get the jab but must go to their GPs to get it.

For non-medical card holders, this usually involves a minimum €30 cost to see a practice nurse, though some doctors do not charge for providing the vaccine.

Stay-at-home and non-Irish mothers, along with public patients and women with lower educational attainment, were less likely to obtain the flu vaccine.

Women who had received information about the vaccine, and those who had previous births, were more likely to avail of it.