Report calls for HSE action plan, with one person accountable for implementation 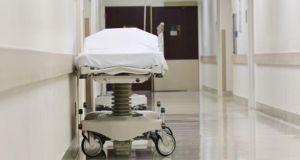 The HSE failed to take decisive action on defining the role of the hospital and to resource it sufficiently. For example, up to last July, the 24/7 emergency department had an emergency medicine consultant on site for only six hours, four days a week. Photograph: Getty Images

An independent patient safety service should be established within a year, according to the Health Information and Quality Authority (Hiqa) report on Portlaoise hospital.

The report calls on the Health Service Executive (HSE) to immediately address the deficiencies in maternity and general acute services in the hospital and to publish an action plan for the measures taken. A named person should be accountable for the implementation of all measures.

Two years after it first made the recommendation in its report on the death of Savita Halappanavar, the authority has again called for a national maternity strategy and said the Department of Health should provide regular updates on progress.

The report also called for the appointment of directors of midwifery at all maternity units and new rules for the sharing of information on health risks between State agencies.

The report on the Midland Regional Hospital in Portlaoise was commissioned by former Minister for Health James Reilly last year after his chief medical officer, Dr Tony Holohan, found the maternity unit was unsafe. This followed controversy over the deaths of five babies whose mothers attended Portlaoise between 2006 and 2013.

“Had the relevance of these investigation findings been reviewed in the context of Portlaoise hospital and the aligned recommendations been subsequently implemented, the authority is of the opinion this could have vastly reduced the identified risks in the services being provided to patients.”

Responsibility for implementing recommendations should therefore be assigned to a named person within the HSE, it said.

The HSE failed to take decisive action on defining the role of the hospital and to resource it sufficiently, according to the report. For example, up to last July, the 24/7 emergency department had an emergency medicine consultant on site for only six hours, four days a week.

In the light of this HSE review and the concerns of senior local clinicians, Hiqa said it was “not reassured” critical care services were sustainable in the hospital.

The investigation team found low numbers of complex surgical procedures were being carried out at the hospital. “Surgeons who do not have the opportunity to treat sufficient numbers of patients or carry out a sufficient volume of procedures run the risk of becoming deskilled.”

In a criticism of national management in the HSE, the report said there was no evidence it was exercising meaningful oversight of the hospital and its inherent risks. Up to February 2014, when Dr Holohan’s report was published, it appeared senior managers were predominantly focused on controlling spending.

Hiqa expresses concern that the State Claims Agency was aware of risks at the hospital as far back as 2007, yet the interaction between the agency and the HSE did not result in the mitigation of these risks.