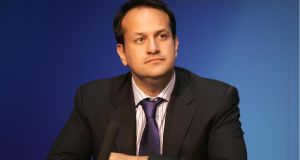 Warren and Lorraine Reilly, who lost two babies after treatment at Portiuncula hospital, have appealed to Minister for Health Leo Varadkar (above) to ensure the hospital review is extended. Photograph: Dara Mac Dónaill/The Irish Times

An inquiry into problem births at Portiuncula Hospital in Ballinasloe last year is being extended to include the 2010 death of a one-week old girl who was delivered in the hospital.

In a reversal of its previous position, the HSE says the death of Amber Reilly in February 2010 will be included in the review of perinatal care of seven women who delivered in the hospital last year.

The decision has been communicated to Amber’s parents, Warren and Lorraine Reilly, who have campaigned for the review to be extended to include up to seven more deliveries at the hospital.

A report into Amber’s death , who died in Holles Street after being delivered in Portiuncula, found serious failings in the management of Ms Reilly’s labour. A number of the shortcomings identified in the report featured in the later cases which are under review, including issues relating to the reading of CTG readings of the fetal heartbeat.

The HSE says the review could be extended to cover another seven families who are due to meet officials next week. If this happens, the draft terms of reference will be shared with them in advance of publication.

HSE director general Tony O’Brien told the Oireachtas health committee it may not be appropriate to extend the terms of reference of the inquiry in two out of the seven additional cases, where families have indicated they do not wish to be included. In addition, some of the additional cases range as far back as 35 years ago.

He said HSE officials would meet with the other families who have concerns about their births in the hospital to see how these cases can be “progressed”.

The seven babies born in Portiuncula last year suffered oxygen deprivation and two of them died.

The HSE said the hospital was satisfied no continuing patient safety concerns arose from the issue identified from last year. There have been no negative outcomes in the maternity unit since “enhanced” monitoring measures were put in place.

Minister for HealthLeo Varadkar told the committee the new national children’s hospital at St James’s was on track to lodge a planning application in June and was expected to be ready by the end of 2019. He described the design of the building as “iconic” and “hugely exciting” and said it even included football pitch.

There was no better testament to 1916, when the Proclamation promised to cherish all children equally, than to start the contruction of a new children’s hospital a century later on the site of the South Dublin Union, Mr Varadkar said.