Newborns can now avail of two new vaccines from their doctor

Parents can apply for MenB and Rotavirus vaccines under immunisation changes 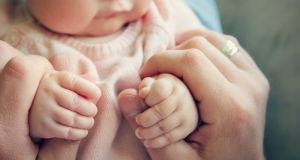 The two new vaccinations for Meningococcal B/MenB and Rotavirus will be given to babies born since October 1st, under an extension of the childhood vaccination scheme agreed between the Irish Medical Organisation and the Department of Health. Photograph: iStock/Getty Images

Parents of newborns can avail of two new vaccines from their family doctor from today.

The two new vaccinations for Meningococcal B/MenB and Rotavirus will be given to babies born since October 1st, under an extension of the childhood vaccination scheme agreed between the Irish Medical Organisation and the Department of Health.

Minister for Health Simon Harris today welcomed the changes to the Primary Childhood Immunisation Programme and said he looked forward to “continuing dialogue” with GPs on a new work contract.

The two new vaccines are being given in addition to other childhood vaccines currently given. The first doses of these vaccines are given at two months of age, which means that the first babies are due to begin receiving these vaccines from the 1st December.

Under the agreement between the IMO and the Department, GPs are to be paid an additional €80 a year for administering the two new vaccines in addition to the existing schedule of vaccines.

Ireland has the highest rate of invasive meningococcal disease in Europe and MenB disease is the major cause of these infections which can cause severe illness and death.

Rotavirus disease is the most common cause of gastroenteritis in children and results in 1,000 hospital admissions each year.

Both vaccines are widely used internationally and are proven to be effective.

Under the agreement, the fee paid to GPs for administering vaccines increases from €300 to €380 per year.