New pricing system for generic drugs to be implemented this year 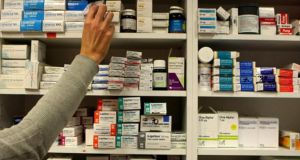 A new pricing system which could significantly reduce the cost of generic drugs will be implemented in the last quarter of this year, according to the Department of Health.

However, it gave no indication yesterday of the level of reference pricing it intends to introduce as a means of cutting the State’s €2 billion a year drugs bill.

New legislation, which President Michael D Higgins signed into law last week, will have some impact on high generic drug prices by forcing pharmacists to substitute cheaper, generic drugs for branded medicines prescribed by doctors. Under current rules pharmacists have to dispense a branded drug where prescribed by a GP.

However, because generic drugs cost up to 90 per cent of the price of the branded equivalent, the savings accruing from this switch will be relatively small. In contrast, the cost of generic drugs in Ireland is up to 24 times the price in the UK.

The Health (Pricing and Supply of Medical Goods) Act 2013 is expected to be commenced this month. It will oblige patients insisting on a branded drug to pay the difference between it and the cheaper generic where available.

The Irish Medicines Board has begun the process of drawing up lists of interchangeable products for the 20 active substances most commonly prescribed.

The first group which has been completed covers variants of the cholesterol-lowering drug atorvastatin, including the original branded drug Lipitor, which is now off patent. After a period of consultation this list will show pharmacists which products can be safely substituted for cheaper alternatives.

A 28-tab pack of mid-strength Lipitor was on sale for €48.89 in one west of Ireland pharmacy yesterday. Three generic alternatives were priced at €45.10 – a difference of less than 10 per cent.

The Act also provides for the setting of reference prices for groups of drugs by the HSE. Under this system the HSE would reimburse drug companies only up to the reference price. It said yesterday that this could only happen after the IMB had drawn up groups of interchangeable products.

However, Rory O’Donnell, president of the Irish Pharmacy Union, said the Government should “bank” savings on generic substitution and allow the market to settle before proceeding further. He warned of medicine shortages if prices were set too low.

The Department of Health, which said it was not possible to estimate the possible savings from the new legislation, selected the 20 active substances around which lists of interchangeable products will be drawn up. After Atorvastatin, the other 19 medicines are Anastrazole,Candesartan, Clopidogrel, Esomeprazole, Lansoprazole, Lercanidipine, Losartan, Olanzapine, Omeprazole, Pantoprazole, Perindopril, Pravastatin, Quetiapine, Rabeprazole, Ramipril, Risperidone, Rosuvastatin, Simvastatin and Valsartan.

Meanwhile, an IMB survey found eight out of 10 consumers would accept a generic medicine if offered it by their doctor or pharmacist, while nine out of 10 who previously used generic medicines said they had a positive experience.

It also revealed GPs (64 per cent) and pharmacists (31 per cent) are the most trusted sources of medicines advice.

However, it also found one in four people were not familiar with the term “generic medicine” and that 17 per cent of respondents would not accept a generic if offered it by their healthcare professional.