New heart treatment could save thousands of lives 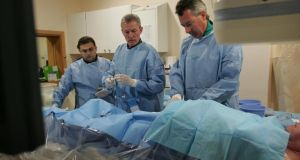 New research has found that inserting stents in all narrowed arteries of heart attack patients, rather than the current practice of only treating blocked arteris, could save thousands of lives.

In heart operations, patients are usually fitted with a stent — a thin mesh tube — in the artery that triggered the heart attack to restore the blood flow, a treatment known as angioplasty.

It is common for other arteries to narrow in heart attack patients. Under the new technique, all narrowed arteries are opened with stents to prevent future problems.

Medical guidelines recommend that specialists only treat the artery which is blocked.

A British trial of the preventative technique found that patients with stents placed in all narrowed arteries were 64 per cent less likely to die, suffer another serious heart attack or have severe angina over the next two years.

The trial involved 465 patients in four specialist heart units between 2008 and this year.

A report on the treatment is published in the New England Journal of Medicine and was co-written by Professor Colin Berry from the University of Glasgow.

He said: “Currently, following a heart attack, patients undergo an emergency operation called an angioplasty. During this procedure a stent is inserted into the blocked artery to restore normal blood. However, around half the patients also have significant narrowings in other arteries which could cause another heart attack in the future.

“The trial showed some of the most striking results for a treatment that I have ever seen. The results of this trial really challenge clinical practice.”

Professor Keith Oldroyd, based at Golden Jubilee National Hospital in Clydebank near Glasgow, said: “The trial shows very clearly that patients have a much better outcome if these other narrowed arteries are stented at the same time as the one that triggered the attack. This strategy is also much more cost effective for the health service.”