National day of action against closure of hospitals planned

First meeting of campaign to save local hospitals is held 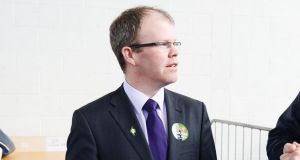 Independent TD Peadar Tóibín stressed the campaign would be open those from all political traditions and none. File Photograph: Alan Betson / The Irish Times

A national ‘day of action’, with demonstrations in towns across the State, will take place in early April, as part of a new national campaign against the closure and downgrading of local hospitals.

A decision was also taken at the first meeting today of the new National Hospital Campaign, to put the issue of local hospital closures on the political agenda in coming months, in advance of the local and European elections. They are expected to take place on May 22nd.

Mr Tóibín, who is also a founder member of the Save Navan Hospital campaign stressed the campaign would be open those “from all political traditions and none” and said once the campaign had gathered momentum he would be happy to “take a step back” from it.

“It is becoming increasingly clear that these cuts cannot be fought in a fractured regional manner. Unless we all stand together this Government will pick off local services one by one,” he said.

Among the groups represented at the meeting were those campaigning to save hospitals in Bantry, Co Cork, in Waterford, in Monaghan, in Co Louth, in Roscommon, and, in the case of St Lukes’s cancer hospital, in Dublin. Independent TD for Roscommon, Denis Naughton, was also at the meeting.

“In Navan we have had our hospital services thrashed over the last few years,” said Mr Tóibín. “The HSE removed surgery from the hospital in 2010 and it was only after we had thousands on the streets protesting that the Government was forced to review taking surgery services out and they have come back to some extent.”

Dr Ruairí Hanley, a Co Meath GP and spokesman for the Navan Hospital Campaign, spoke on how to campaign against HSE’s and Department of Health’s “programme” to downgrade or close local hospitals, saying these two organisations were “spinning and manipulating people with false arguments”.

“The official line is that we have too many emergency departments when what we have is a lot of overcrowded hospitals in urban centres,” he said. “The fact is this country needs small, local hospitals. We cannot downgrade them without putting lives at risk.”

While acknowledging serious trauma cases would always have to go to major hospitals, he said a significant majority of people arriving into emergency departments were best treated in hospitals near their home. He said pneumonia was a major reason people arrived into A&E, not major trauma.”

Tony Gregg of the National Ambulance Service Representative Association, said the national ambulance service didn’t “have sufficient resources to put the service out on the streets” and said there was “no doubt” people were dying needlessly as a result.

A further ‘planning meeting’ of the campaign will take place in the first week of February.