Mother’s ordeal suggests A&E system may be beyond repair 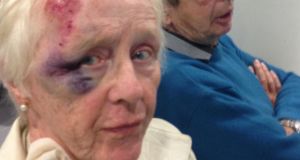 On a recent Friday night, as my colleague Conor Pope’s Magazine feature on his overnight shift in the A&E department at St James’s Hospital was hitting the streets, my mother’s eight-hour quest for treatment in an acute Dublin hospital was coming to an end.

Nan Collins (77) has reduced vision due to age-related macular degeneration, an eye condition that affects one in 10 people over the age of 50. On Friday, September 20th, she tripped in a car park at Dublin Airport. When I met her shortly afterwards she had a serious-looking wound on her forehead and was nursing her right wrist.

My immediate instinct was to get her to the nearest A&E department, in the Mater hospital. Big mistake. It was mid-afternoon on a Friday, so we naively thought it wouldn’t take long for her to be treated.

Not having a medical card, she was asked to pay a non-refundable €100 fee on arrival, before getting any indication of the possible waiting time. She was seen by a nurse just after 5pm, an hour after we arrived, and at 8pm, after I asked could she see a nurse again.

The hours passed in a blur – there’s not much to distract you, and you spend the time oscillating between worry about your relative and anger at the inefficiency of the system. By 11pm I’d had enough and got through to the nurses’ station and successfully pleaded my mother’s case. We were brought into a side ward where, almost eight hours after arriving, my mother began to be monitored to check whether she had concussion.

Just after 2am, it was confirmed Nan had broken her wrist, and would be kept in A&E overnight for a CT scan the next morning.

Infuriatingly, my mother’s experience is by no means unique.

The Mater’s new A&E department opened last February as part of a €284 million extension to the hospital. One newspaper report suggested “patients will receive treatment faster and more effectively and their dignity and comfort will be ensured in the bigger, better building”. None of that was in evidence during our visit.

Getting into A&E is tricky. There are very few signs inside or outside the building. However, there are signs suggesting how to interact with staff, how to pay the €100 fee and why it can’t be refunded even if you don’t see a medic.

Drug treatment
We didn’t see enhanced facilities in the waiting area, unless you count the vending machines stocked with chocolate bars and undrinkable coffee. There are recharging units for mobile phones – at €2 a shot – confirmation that any visit here is likely to be a lengthy one.

Dublin is in the midst of a drugs crisis but on the day in question a number of addicts were attending casualty for fairly routine treatment – not overdoses or other emergencies. At one point a young man accosted the security guard in an effort to get seen more quickly. “I’m only here for a prescription,” he announced as everyone else in the room stared at the ground.

The security guard immediately cornered a nurse and the man was seen shortly afterwards. Why doesn’t the city have drug treatment clinics that are open 24/7 instead of having addicts turn up at A&E – one of the most expensive ways of delivering medical care?

No information is provided to those waiting unless they cause a commotion; even trying to find a nurse or doctor is impossible as they are behind the locked doors in the treatment area and you are left in the waiting area trying to figure out can you sneak in past the security guards.

Surely people should be seen on the merits of their condition rather than on the basis of how willing or able they are to plead their case?

The initial examination determines whether a patient is an emergency or non-emergency, but there is no grading of the non-emergency cases according to their age or other factors.

Once an emergency case arrives, they go to the top of the queue and non-emergencies are bumped back. By midnight we were told Nan was fifth in the queue even though we had been there since 4pm.

That a woman had to sit in pain on an uncomfortable seat in an airless waiting room for nearly eight hours before anyone even checked whether she was concussed is not acceptable.

That my mother’s experience is regarded as par for the course is just the latest indication that our health system is not just seriously broken but may even be beyond repair.

The Mater Hospital was asked to comment on a number of issues raised in this article in advance of publication. Here is its response:

In the interest of patient confidentially we cannot comment directly on one individual case, however we do have some feedback in relation to some of the issues you have specifically raised:

1. Since the new department has opened we have seen a significant increase in attendances - at least 10% so far without any ability to increase medical staff. On the day in question we had in excess of 200 patients to see and treat - this was exceptionally high for a Friday - about 30 more that our average. Indeed this Monday was our busiest day ever with 273 patients attending.

There are also periods of the day when attendances are higher - this is usually in the afternoon when GP practices close. Part of the reason for our increase in business is that patient experience has significantly improved since opening of new department.

Despite the increased activity and the Mater having the highest number of attendances of the Dublin Area Hospitals, we have the second lowest waiting time (or Patient Experience Time). This year we achieved a 52% improvement in trolley wait times.

2. Triage of patients follows recognised international standards to allow the sickest be seen first. We also have robust and appropriate pathways for the frail elderly in line with National guidelines and standards.

Delays of this length are unacceptable and on Friday September 20th we attribute the waiting time to the surge in numbers and an inability to increase medical manpower to match it. The patient pathway in the ED is based on clinical need. Those patients requiring true emergency care (heart attack, stroke, major trauma) are seen immediately.

Those requiring urgent medical attention are seen after true emergencies as soon as we can. The Mater has established a number of services to treat patients outside of the ED - unfortunately many of these can only work Monday - Friday due to budget and man power constraints.

3. The Mater ED also takes a pragmatic approach to sorting problems as they arise. If a patient presents or is asked to return to collect a prescription/dressing or similar, we try get this sorted as soon as possible to reduce overall crowding in the department. We cannot comment specifically on any situation observed.

4. We acknowledge your observations regarding signage and will consider this, however it has been our experience that patients tend to get annoyed if the suggested wait time lengthens as sicker patients/ambulances arrive. In our minor injury unit we treat patients within 1 hour 30 minutes.

‘The IRA has gone and they are not coming back. That’s the reality’ 14:57
Shannon at high risk of flooding as rainfall warning issued for most counties 13:43
Sinn Féin to hold public meetings around country to rally support for government efforts 10:59
Gardaí wish to speak to taxi driver after girl dies in Cork car crash 10:08
Viable device left in Armagh residential area could have been ‘devastating’ 19:40

1 Portraying Sinn Féin as a dangerous party is a political strategy
2 Coronavirus: Global concern grows with sharp rise in infections outside China
3 When the RIC opened fire on a crowd in Ennis during the Clare grain riots
4 Shannon at high risk of flooding as rainfall warning issued for most counties
5 Bernie Sanders cements lead in Democratic race after win in Nevada
Real news has value SUBSCRIBE