More than 10,000 children signed up to free GP care 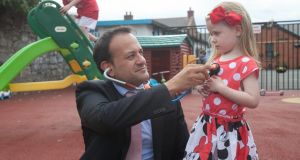 Parents have signed up more than 10,000 children on the first day of the Government’s free GP care for under-sixes scheme, despite the dedicated website crashing briefly due to heavy traffic.

Almost two-thirds of GPs with existing State contracts have now registered to provide free care for children under six.

Minister for Health Leo Varadkar said the launch of the scheme had gone well despite the IT problems and the patchy support by GPs in some areas.

He dismissed as “facile” claims by opponents of the scheme that it is unfair, and predicted doctors would in the coming weeks register in those “relatively small” number of areas where opposition has been greatest.

“This train is leaving the station. This is done. It’s happening and we’re now happy to talk to GPs about renegotiating the existing contract dating back to the 1950s,” Mr Varadkar said at the official launch of the scheme.

Free GP care for children under six represented the first phase of universal healthcare and the restoration of resources to general practice, he said. The next phase would see entitlement extended to older children, with free GP care for all adults introduced after the next election.

The dedicated website, gpvisitcard.ie, crashed for a time on Monday morning as parents sought to register their children. The Health Service Executive said the problem was fixed by 11am.

More than 270,000 young children are eligible for the scheme from July 1st, provided they can register with a GP. Participation by family doctors varies hugely across the State, from 8 per cent in south Tipperary to 94 per cent in Co Donegal. The overall registration rate is 63 per cent.

Not a single GP has signed up in the towns of Cashel and Clonmel in Co Tipperary, and just one in Cahir.

This is likely to be an issue more in rural areas where low numbers of doctors have registered than in urban areas where more choice exists.

Mr Varadkar pointed out free GP care is the norm in Europe and Ireland is one of the last countries to adopt the policy. The existing policy of assessing children on the basis of their parents’ income was an “oddity” relative to practice in other areas of Government, he argued.

Of the 2,450 GPs who have registered for the scheme, more than 120 require paper registration of patients.

Absent from the list of GPs who have registered for the scheme is the practice owned by former minister for health James Reilly in Lusk, north county Dublin. Dr Reilly has leased out the practice and has no involvement in its operation.

Mr Varadkar said there was no basis for meeting the National Association of General Practitioners, given it was threatening legal action against the scheme.