McGrath entitled to tobacco views - but not to ignore evidence 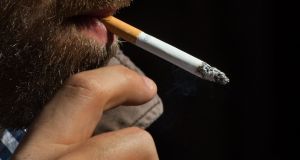 In 2013, Finian McGrath told TDs: “We all accept that smoking damages health, but so do excessive eating, drinking and lots of other things.” The difference, of course, is that all smoking is bad, not just excessive consumption. File photograph: Dean Lewins /EPA

You have to go back a generation to find a time when an apologist for the tobacco industry was so strategically placed as Finian McGrath now is as a member of Cabinet.

McGrath is fully entitled to smoke and to have his own views on smoking. What he is not entitled to do – particularly as a Minister of State in the Department of Health – is to ignore evidence and rely on skewed statistics in making his argument.

He has done this consistently over the years. He has claimed, without evidence, that “most” smokers would not light up in cars when children are present. He says, again without evidence, the smoking ban “makes it easier for drug pushers to peddle their wares”.

The arguments he has used are the same as those of the tobacco industry, which focuses on the threat to exchequer revenues posed by cigarette smuggling. McGrath has repeatedly claimed the State is losing up to €1 billion a year because of this, when industry reports even put the figure far lower.

Instead, his arguments are laced with portrayals of smokers as victims, “soft targets” being “hammered”.

The real baddies are the “nanny state brigade” and the “health police” led by the “bully boy” Minister for Health, who are eroding the civil liberties of smokers.

Ireland’s current policy on tobacco control aims to “denormalise” smoking but McGrath favours the strategy of health education, which has had limited success.

His arrival at the political top table comes at a critical juncture, with the imminent introduction of plain packaging for all tobacco products. Ireland will be the first country after Australia to introduce this measure. The tobacco industry fought it tooth and nail, and Taoiseach Enda Kenny was heavily lobbied by US interests.

Strangely, it is not mentioned in the programme for government, while there are two references to tackling cigarette smuggling in it. Former minister for health James Reilly, who championed this and other anti-smoking initiatives, is gone and McGrath now sits at Cabinet.

Speaking in Beaumont Hospital, McGrath said he was sticking to his guns while insisting he supported Government policy to move to a tobacco-free Ireland.

Outside, scores of patients and staff sat in the sun smoking away in front of the “tobacco-free hospital” signs, an indication of how popular McGrath’s views may be – and how far we yet have to go.