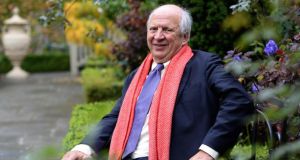 The trouble with living a packed life is that at least some of the things that happen along the way will be unpleasant. It’s something Jonathan Irwin knows only too well from 73 years of life lived to the full, and then some.

On the face of it, the plummy-toned Old Etonian who has called Ireland home since 1959 has lived a charmed life. The son of bohemian actor parents who hobnobbed with the rich and famous, he enjoyed a globetrotting, successful business career, most notably in the horsebreeding industry through a 35-year association with Goffs.

Then there was a late-career move that saw him centrally involved in bringing the Tour de France to Ireland in 1997, as well as a bizarre attempt to attract the Olympics to Dublin. Yet behind these gilded headlines, the dark side. Cancer. A failed marriage. The tragic death of three sons within six years, at very different ages and in very different circumstances.

It was the last of these deaths, that of 22-month-old Jack, that propelled Irwin and his wife, Mary-Ann O’Brien, to help other parents of very sick children by founding the Jack & Jill Children’s Foundation, which has funded respite care for the families of over 1,700 children since 1997.

Never a person to let the grass grow under him, Irwin has written an autobiography-cum-political manifesto, which was launched by his friend, businessman Denis O’Brien, yesterday.

The book charts his early life with his “glamorous, busy and exciting” parents in England. “Looking back, I sometimes think I had the best of everything – an exciting, showbiz childhood, with the marzipan coating of Eton.”

Fond memories of childhood days spent in Ireland prompted a decision to come to Dublin to study but Trinity “wasn’t up to much” and he left before the year was out. Far more interesting were the “wild parties” of the Ginger Man era in the “seedy and tumbledown” Dublin of the early 1960s.

He started on £5 a week in a small bloodstock agency on Merrion Square in 1960 and hardly looked back in the subsequent decades, especially after Charles Haughey introduced tax relief on stallions. Irwin moved to Goffs, which under his guidance grew to a €100 million a year business. Along the way there was the short-lived marketing success of the Cartier Million and the kidnapping of Shergar, both recounted in detail in the book.

Bored by so many years in the one job, he moved to Ryanair, despite knowing nothing about the airline industry. At the time, Tony Ryan was still at the helm, but a young Michael O’Leary was financial controller. The two didn’t always see eye to eye, especially when Irwin suggested letting pensioners fly for nothing.

“I lasted about a year and really enjoyed it – it was a totally different world, but it wasn’t for me.

O’Brien, his second wife, is the founder of Lily O’Brien chocolates and sits in the Seanad as one of the Taoiseach’s nominees, but she was Irwin’s secretary when they met.

In 1994, they experienced the first tragedy in their lives when one of their twins was stillborn. “I was so ignorant in those days, had led a life so mercifully free from heartbreak, that I didn’t even know stillborn children are buried. I will never forget the misery of getting through that funeral, of carrying his little white coffin under my arm, and burying this poor baby who never lived at all.”

Two years later, Jack was born healthy, but he suffered severe trauma after choking on his own mucus after two days. The descriptions in the book of his suffering are heart-rending. “He was in constant pain and cried all the time, an endless, heart-breaking wail that we couldn’t soothe or quiet, and that tore at our already shredded nerves,” Irwin recalls.

“No matter how much we loved him, we couldn’t make his life easier for him, couldn’t calm his distress, and knowing that made everything so much worse.”

The second shock for the couple was the discovery that there were no support services for their sick child outside the hospital. One consultant even advised them to abandon Jack for his own good and put a gun to the head of the health service.

Instead, they went home, and tried to cope with the 22-hour stints involved in tube-feeding their newborn, the epileptic fits, the lack of sleep. Friends pitched in, lightening the care burden, but Jack died before his second birthday.

The experience revealed to the couple the shortcomings of “Official Ireland”, he says. “Every step and stage of Jack’s life showed us the appalling limitations of the State, and the consequent tremendous difficulties faced by the parents and families of these children.”

Determined that other families should benefit from the help they got, the couple set up the charitable foundation which has raised €55 million for the care of sick children since then.

Having to care for a seriously ill child imposes a heavy toll on families – stress, financial hardship, broken marriages. “You can always daydream about winning the lottery to sort out financial worries, but there is no medical equivalent for a badly damaged child.”

Irwin has been politicised by his battles with bureaucracy. He was prominent in attacking the Government during the medical card controversy and he soldiers on as an opponent to the siting of the new national children’s hospital at St James’s.

Now, despite being on crutches after a joust with cancer, he wants to stand as an Independent in the next general election. He’d like the charity sector reformed, the catering in Leinster House opened up to outsiders and the children’s hospital moved to a greenfield site in Blanchardstown.

“When I was younger, I presumed that with my accent I hadn’t a hope of being elected. Now I am so fed up that I don’t care about my accent at all any more – largely because I think other people too are so fed up that they will see beyond it.”

Jack & Jill: The Story of Jonathan Irwin is published by Mercier Press, and priced at €16.99. All proceeds go the Jack & Jill Children’s Foundation.

1 Donald Trump is in trouble, and that could spell very bad news
2 Some larger stores to reopen on Monday ahead of schedule
3 House parties are being held ‘with abandon’, Holohan warns
4 O’Doherty and Waters ordered to pay legal costs of case against State over Covid-19 laws
5 Two teenage girls charged with murder of Cian English on Gold Coast
Real news has value SUBSCRIBE