‘We have world class doctors and nurses, they should be allowed to do their work’ 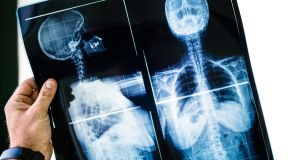 According to media reports, the HSE is considering sending scoliosis patients abroad for treatment under the National Treatment Purchase Fund. Photograph: iStock

Sending Irish scoliosis patients abroad for treatment is not a viable option, the Scoliosis Advocacy Network has said.

Responding to media reports that the HSE is considering sending patients abroad for treatment under the National Treatment Purchase Fund (NTPF), spokeswoman Clare Cahill told RTÉ’s Morning Ireland that the issue of post operative care and follow up treatment would make it difficult.

Ms Cahill’s seven year old son has been awaiting surgery since August 2015 but it has been deferred a number of times and at this stage there is no date for the procedure he requires.

She said that there are 200 children and young adults on the surgery waiting lists in Ireland. “No one has told us about this. It is disgraceful that it is even being considered to send our children around Europe for treatment.”

The issue is not just the cost of the operation, but the ongoing care and follow up treatment, she added.

“There are very high complication rates. There would have to be assurances that there would be post surgery support.

“If a patient developed post operative complications would they have to travel back to the UK for treatment?”

Ms Cahill said she feared that surgeons in Ireland would not like to follow up the work of another surgeon.

“We have world class doctors and nurses here, they should be allowed to do their work.”