Discovery relates to Vitamin E acetate, which is often found in illegally-made devices 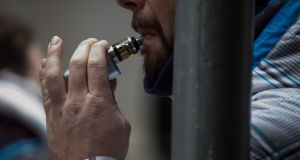 A chemical commonly found in vitamin supplements and skin creams generates a highly toxic gas when burned in some vaping products, Irish researchers have found.

The discovery by scientists at RCSI University of Medicine and Health relates to Vitamin E acetate, which is often found in illegally-made vaping devices. The team at its department of chemistry confirmed the chemical generates a gas known as Ketene.

In August 2019, the US Centers for Disease Control and Prevention reported an increasing number of lung injuries following the use of some vaping products. Vitamin E acetate was identified as one possible cause though some patient lung biopsies showed signs of chemical burns that vitamin E acetate alone would not be expected to cause.

Ketene is a colourless gas with a penetrating odour. When inhaled, it can cause serious damage to the lungs up to 24 hours after exposure. It is lethal at high concentrations, and at lower concentrations, it can irritate the eyes and lungs and impair the central nervous system.