Irish near top of OECD table for smoking and drinking 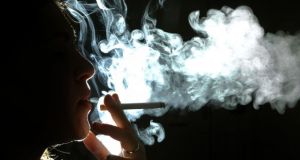 The Organisation for Economic Co-operation and Development’s Health at a Glance 2013 report confirms the serious impact of the recession on health spending. Photograph: Fabrizio Bensch/Reuters

A major overview of health in Ireland published today shows that the Irish are still near the top of the international league table for smoking and drinking and have a greater propensity towards obesity than people in many other countries.

The Organisation for Economic Co-operation and Development’s Health at a Glance 2013 report confirms the serious impact of the recession on health spending which had been growing in Ireland at 7 per cent annually during the boom years between 2000 and 2009. But it fell by 6.6 per cent annually between 2009 and 2011 on a per capita basis, with only Greece experiencing a sharper fall than Ireland.

The report says that the fall in Irish spending reflects the substantial reforms undertaken, including cuts to cost of health care, such as wages and pharmaceuticals.

But the report also confirms the encouraging progress made in combating serious illnesses in the last two decades. Deaths due to cancer fell by 21 per cent, ischemic heart disease by 59 per cent and cerebrovascular disease by 54 per cent between 1990 and 2011. In all three instances, the rate of decline was greater than the OECD average.

Oecd health at a glance 2013 | Infographics

And life expectancy in Ireland has increased by a full four years since 2000 to reach 80.6 today, slightly more than the OECD average of 80.1. Ireland remains more than two years behind the table-topper, Switzerland, where life expectancy is 82.8 years.

Ireland still ranks badly when it comes to smoking, drinking and obesity.

Out of 40 countries surveyed, only the Russian Federation, Greece and Chile have a higher proportion of adult daily smokers than Ireland’s 29 per cent. And although this represents a decline of 12 percentage points since the year 2000, the decline is much smaller than in many other countries. However, this smoking data comes from 2007 and therefore may not give a completely accurate picture of current trends.

Only five countries out of 40 drink more alcohol than Ireland annually on a per capita basis. Average consumption in Ireland has increased slightly in the last 20 years, compared to the significant reductions recorded in some high-consumption European countries, including France, Austria, Portugal and Spain.