Ireland’s population one of most rural in European Union

Rural dwellers 42% of population, compared to average of 27% in EU and 12% in Britain 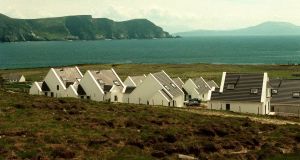 Ireland has one of the highest proportions of people living in rural areas among EU states, a new Eurostat survey shows.

Some 42 per cent of Irish people live in rural areas compared to an EU average of 27 per cent.

More than a third, or 35 per cent, of Ireland’s population lives in cities compared to an EU average of 41 per cent.

Almost a quarter of Irish people (23 per cent) live in towns and suburbs compared to an EU average of 32 per cent.

The figures also show the employment rate of people living in towns and suburbs in Ireland (66 per cent) is lower than that of city dwellers (69 per cent) and rural dwellers (70 per cent).

People in towns and suburbs in Ireland are also at a greater risk of poverty or social exclusion (29 per cent ) than those living in cities (26.3 per cent) and rural areas (27.6 per cent ) contrary to many other EU countries.

To be “at risk of poverty” is to live on an income below 60 per cent of the median income.

The programme for government commits to delivering 135,000 jobs outside of Dublin by 2020.