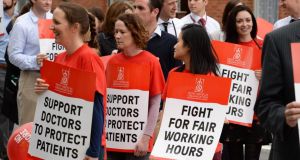 Ireland has been referred to the European Court of Justice for its failure to comply with EU working hours legislation regarding the work practices of doctors in public hospitals.

The European Commission said this morning that Ireland had failed to ensure that doctors worked no more than an average of 48 hours per week, including overtime, as set out in the European Working Time Directive.

According to the commission, there are still “numerous cases” where junior doctors in Ireland are regularly required to work continuous 36-hour shifts, to work more than 100 hours in a single week or 70-75 hours on average, and to work without adequate breaks.

“The commission considers this situation a serious infringement of the EU’s Working Time Directive, endangering not only doctors’ health and safety but also their patients as over-tired doctors risk making mistakes,” the EU’s executive arm said.

The commission said it became aware of the infringement of EU law following national reports on the issue and following a complaint from an Irish doctor’s association. The Irish Medical Organisation has been campaigning strongly on the issue of junior doctor hours, with a one-day strike taking place in early October.

A further strike last month was averted following a deal reached at the Labour Relations Commission, which included financial sanctions for hospitals found to be in breach of the EU Working Time Directive.

Minister for Health James Reilly said at the time the Government was committed to achieving compliance with the European working time directive in respect of NCHD’s ( Non consultant hospital doctors) by the end of 2014.

Dr Reilly said he was “disappointed” at the decision to refer Ireland to the ECJ.

“I have met with the Commissioner for Employment, Social Affairs and Inclusion, Mr Andor, on two occasions and have used those meetings to emphasise Ireland’s commitment to achieving compliance with this Directive. This remains the position of the Irish Government.”

He said he had made the issue a top priority in 2013, and will continue to prioritise the issue until full compliance is achieved. “Already, good progress has been made in relation to reducing the number of doctors working more than 68 hours per week and the incidence of shifts longer than 24 hours.”

On Monday, the mother of a junior hospital doctor who took her own life has described her daughter’s working hours as “immoral” following an inquest into her death.

Dr Jessica Murphy (26) was found unconscious in her apartment at Exchange Hall in Tallaght, Dublin, on December 1st last year. She was later pronounced dead at Tallaght Hospital, where she was a junior doctor working in neurology. Dublin Coroner’s Court heard she had taken an “overwhelming” overdose of the anti-depressant amitriptyline.

Her parents raised the issue of her working hours during the inquest, telling coroner Dr Brian Farrell that she worked 95 hours a week.

Following the completion of the inquest, Marian Murphy said her daughter had been “put under too much pressure”.