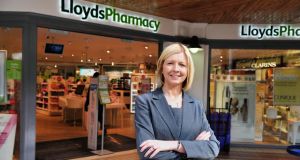 Lawyers for LloydsPharmacy criticised the HSE for alleging fraud and breach of contract in a letter sent to managing director Goretti Brady (pictured) earlier this month. Photograph: Aidan Crawley

The HSE is investigating the way Lloyds, the largest pharmacy chain in Ireland, has significantly boosted its dispensing fee income by claiming multiple payments from the State for single prescriptions presented by medical card holders.

Individual pharmacies in the LloydsPharmacyIreland chain could boost their fee income by 66 per cent by using a system developed within the company, branch managers were advised in an internal memo.

Lloyds has denied there was any fraud in its practice of claiming up to four fees in a month in respect of a single prescription dispensed in one visit and said its approach was no different to any other pharmacy.

Lawyers for the company criticised the HSE for alleging fraud and breach of contract in a letter sent to Lloyds managing director Goretti Brady earlier this month.

In its replying letter, Lloyds’ lawyers called on the HSE to withdraw the “entirely unfounded” allegation for which no substantiation had been offered.

LloydsPharmacyIreland operates a system known as MyMed, which, in the case of a four-week drug supply, involves putting a patient’s medication into four separate compartmentalised trays, one for each seven-day period. The drugs are all supplied to a patient in a single visit to the pharmacy.

Lloyds claims it is entitled in such a case to both the first dispensation fee of €5 and three additional phased dispensing fees of €3.27 each.

The HSE, however, contends that when all medication is dispensed to a patient on the same date, Lloyds is entitled only to the €5 dispensing fee per prescription item.

Concerns within the HSE were raised when it became aware of a notice from Lloyds head office to its pharmacies, entitled “MyMed Profitability”. The notice said: “Wondering why we’re obsessed with MyMedding?!” and included a graphic which it said “should show you why it’s so important to hit your target. And why it’s even better to hit your target early so you can make a real dent on your overall profitability for the year.”

The notice said the graphic illustrated “the difference in fees between a MyMed and normal dispensing”.

Elsewhere, under the graphic, the notice stated: “MyMed increases our dispensing fees by 66%!”

When the HSE wrote to Lloyds about the issue, the pharmacist’s solicitors said they were instructed the MyMed system involved considerable resources and “dramatically increases the time it takes to prepare the prescribed medication for dispensing to patients”. They said Lloyds took the view the process “clearly involves the assembly of four separate weeks’ supply of medication, each of which require to be checked individually and amounts to the dispensing of medication on a phased basis, notwithstanding that all four trays may be supplied to the patient at the one time”.

They added: “It is on this basis that our client claims the additional phased dispensing fees.”

The HSE wrote to Lloyds earlier this month after receiving allegations from a whistleblower and after an inspection last July of certain pharmacies.

The HSE declined to comment on the matter as there was an investigation underway.

A spokeswoman said pharmacists were entitle to claim a fee for each tranche of medicines dispensed. They could claim an additional fee for phased dispensing “in certain narrow circumstances” relating to patient safety or the shelf-life of medicines.