Hospitalised after getting swine flu while pregnant 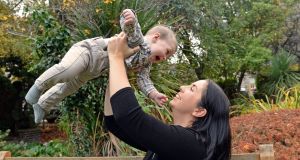 Bríd Stack was 26 weeks pregnant when she awoke one night last February, feeling extremely ill. “It seemed to come from nowhere. One minute, I was fine, the next, it was 1am and I was violently ill.”

With the vomiting persisting the following morning, she contacted the Rotunda hospital and was advised to come in as a precaution. There, her condition continued to worsen and tests confirmed she had swine flu.

Her chances of getting infected would have been lower had she got the flu vaccine, but now it was too late. “I don’t know why I didn’t get it. They were offering it at work, but I walked past, thinking I’m young and fit and it won’t affect me. It was never suggested at my antenatal appointments, but I know that is not an excuse,” says Stack, a radiographer from Ballybunion, Co Kerry.

In the hospital, Stack had few of the symptoms you might expect from the flu but needed four different antibiotics as doctors struggled to ward off the threat of sepsis. Her concern grew as the medical team talked of having to deliver her baby early.

Fortunately, her symptoms subsided and she was discharged after five nights in hospital. On returning home, she was so weak she had to climb the stairs “on my hands and knees”. She was off work for a month and, even then, “I didn’t feel 100 per cent.”

Happily, her first son Pearse was born a few months later and she has fully recovered. The experience has forced a re-think: “I hope people learn from my mistakes. And if I’m having a second baby, I’ll definitely get vaccinated, just as I’ll take folic acid, not smoke and avoid alcohol.”