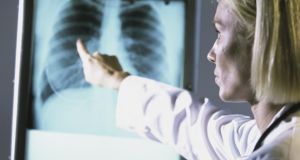 There are five radiologists per 100,000 population in Ireland compared with 7.8 in Germany and 11.3 in France, says Royal College of Surgeons.

The faculty, which is part of the Royal College of Surgeons in Ireland, was commenting after more than 100 patients were recalled over the misreading of X-rays and other scans by three locum radiologists employed by the HSE.

The college’s communications manager, Niamh Walker, said Ireland had a much lower number of radiologists per capita than other European countries.

There are five radiologists per 100,000 population in Ireland compared with 7.8 in Germany and 11.3 in France, she said.

Ms Walker said an IT platform currently being installed in HSE hospitals as part of a wider quality assurance programme would mean examinations recorded by one radiologist would automatically be assigned for review and second reading by another consultant radiologist.

She added: “The clinical demand for radiology services is increasing steadily in Ireland. This has led to high workloads for Irish radiologists when compared with their peers in other countries and partly explains why it can be so difficult for some hospitals to find locum cover.”

Ms Walker said a recent substantial investment by the HSE to develop a national electronic radiology IT system and hospital group structure should be accompanied by “a well-designed expansion in consultant radiologist numbers”.

The Irish Times reported on Thursday that thousands of X-rays and scans were reviewed and more than 100 patients recalled after errors were found in the work of three locum radiologists.

The locums, who no longer work in Ireland, were reported to the Medical Council after colleagues raised concerns over their work. They worked in seven hospitals.

Fine Gael Senator Colm Burke said the HSE should prioritise the recruitment of hospital consultants over the use of expensive locum staff.

“The use of locums and agency staff leads to lack of continuity in patient care. Aside from the recent concerns about quality, locum staff are far more expensive than what the health system would be paying permanent staff in similar roles,” he said.