Heartbreaking decision to travel to England for an abortion 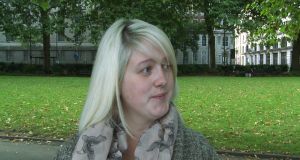 “It was extremely difficult for me to decide to have an abortion. We are a family who never had to think about abortion until this happened. Suddenly, I was a 23-year-old woman dealing with something I never thought I’d have to.

“I went for a private 3D scan when I was 19 weeks pregnant. We wanted to know if we were having a boy or a girl.

“During the scan we were told that there was something wrong and they rang ahead immediately to the Ulster Hospital to tell them to expect us. We got there and were scanned again.

“We were told to prepare ourselves for the worst and an urgent appointment was made for me the next morning with a senior sonographer.

“After a number of scans it was confirmed that the baby girl I was carrying had anencephaly – which means the skull and brain hadn’t properly developed.

“We had never heard of anencephaly and so thought at that point we would be able to have operations and bring our daughter Ella home, make her as comfortable as possible and whatever time we had with her would be our time.

Abortion journeys: where women from Ireland have abortions in England and Wales

Use the layer menu to filter the view of the map

“As we listened to the consultant and the midwife it quickly became clear that this was not going to be an option for us and that the birth would be extremely difficult. I asked what my options were and was given only one – to continue with the pregnancy.

“I couldn’t face continuing with a pregnancy I knew wouldn’t survive so I enquired about a termination. Immediately we were told they couldn’t discuss that or advise us on anything to do with an abortion. Legally, they were not allowed to offer that as an option, never mind talk about it. We left, numb and devastated.

“I came home and started to do my own research. I spoke to my husband, my mum and dad and told them I wanted a termination. They said they would support me in my decision.

“It was terrible going to a place I didn’t know, to people I didn’t know and not having the full support of my consultant, medical staff and my full family around me. It made a terrible situation so much worse.

“It cost us over £2,100 to get there. When we paid the clinic £1,350 they said that we were lucky coming from Northern Ireland – we were getting it at a discounted rate. It is normally £1,750 for the procedure. The rest of the cost was for flights and accommodation – not including food. Mum and Dad went to the bank and family members helped too. My parents had just paid for my wedding that year. I just want to say a big thanks to my mum (Jane Christie) who has been amazing throughout this journey, helping me every step of the way. I could not have managed without her love, support and motivation.

“A change in the law here is needed to help women like me. The experience is distressing enough without having to go to England for treatment.

“Support is needed for women like me who have taken this heartbreaking decision. If a woman wants to go through a birth that’s okay, but if a woman doesn’t want to there has to be another option. Neither one is easy.

“We need compassion, respect and dignity.”

Last month, Ms Ewart joined the judicial review taken by the Northern Ireland Human Rights Commission which resulted in Belfast’s High Court ruling that the North’s abortion law is incompatible with human rights law in the case of pregnancies resulting from rape or incest, or where there are fatal foetal abnormalities.

1 Irish in Canary Islands: Life has changed dramatically
2 Boy’s treatment by school over alleged thefts was ‘unbelievable’, judge says
3 Pubs to stay closed until September at least as restrictions tightened significantly
4 ‘This was like a nuclear bomb’: More than 2,700 injured in Beirut explosion
5 Hume brought to Derry as candles in windows light his way
Real news has value SUBSCRIBE