Closure of non-essential retail and reintroduction of 5km restriction expected 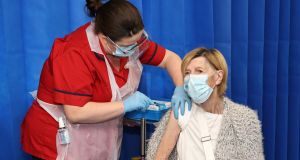 The Cabinet will meet on Wednesday afternoon to consider returning the State to a full Level 5 lockdown after the confirmation of 1,546 new cases of Covid-19 in the Republic, the highest daily number recorded during the nine months of the pandemic.

The National Public Health Emergency Team (Nphet) on Tuesday night confirmed the figure, which surpasses the previous record of 1,296 recorded on St Stephen’s Day, along with a further nine deaths of coronavirus patients.

Wednesday’s meeting of Ministers was hastily arranged at mid-morning on Tuesday following what was described as an “exponential” increase in the number of cases, the highest number of hospitalisations since May and a massive rise in referrals of suspected cases in the past week.

Minsters said they expected numbers to continue to grow sharply over the coming days reflecting increased social contacts at Christmas. “This is perhaps the most dangerous moment for the country since Covid-19 began,” said one Minister, speaking on the basis of anonymity.

The Cabinet is expected to reintroduce all Level 5 restrictions including the closure of non-essential retail as well as the reimposition of people being restricted to within 5km of their homes. It will also end two days early the concession that allowed two families socialise in one home until December 31st. This is being done to reduce the opportunities for New Year’s Eve celebrations.

Government wants schools to remain open, although primary teachers’ union the INTO has called for a delay in reopening primary and special schools.

Minister for Higher Education Simon Harris said Ireland found itself in a “dark and worrying place” in relation to Covid-19.

Given the evidence of exponential growth across a number of indicators in recent days, he said he “would not be surprised” if there were more than 2,000 cases a day by New Year’s Day.

Minister for Health Stephen Donnelly also pointed to the near doubling of hospitalisations in the past week as a significant concern, and said he did not want to see the health service overwhelmed.

Ireland is set to receive an additional one million doses of the Pfizer/BioNTech vaccine after the EU responded to surging case numbers by ramping up orders for the one treatment it has so far authorised.

EU Commission president Ursula von der Leyen said on Tuesday the bloc had decided to take an additional 100 million doses of the vaccine, on top of the 200 million already ordered.

The extra supplies may compensate for delays in the approval of other vaccines Ireland was slated to receive.

It emerged on Tuesday that the roll-out of the Oxford University-Astra Zeneca vaccine is unlikely to go ahead as hoped in January after a senior official in the European Medicines Agency said regulators did not have enough information about the vaccine.

Meanwhile, seven cases of the new, more transmissible variant of Covid-19 first identified in the UK have been sequenced in the Republic, along with one in Northern Ireland, according to a new risk assessment from the European Centre for Disease Control.

It says that although there is no information that infections with the new strain are more severe, because of increased transmissibility, the impact of the virus is assessed as high in terms of hospitalisations and deaths.

Annie Lynch, a 79-year-old Dublin grandmother, on Tuesday became the first person in the Republic to be vaccinated against Covid-19.

She was among 2,000 people, mostly frontline health workers, who received the first supply of the vaccine in four hospitals in Dublin, Galway and Cork.

Despite supply difficulties with the vaccine arising in some other EU states, the HSE said there was no delay in the delivery of vaccine doses to Ireland at present.