Four men died in the town and one nearby in the past month, aged in their 30s and 40s 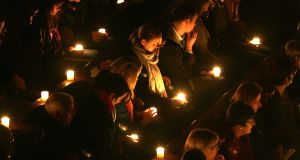 The Console Celebration of Light for those bereaved through suicide: Console operates a 24-hour helpline for people with suicidal thoughts or people aware of others at risk on 1800-247247. Photograph: Alan Betson / The Irish Times

The tragic deaths of five young men in the Newbridge area over the past month has raised fears of a possible suicide cluster in the Co Kildare town.

The deaths, four in the town and one nearby, has caused shock in the area. Three were in their 30s, and one in his early 40s.

No obvious link between the deaths has been established, though two of the men were related and two lived on the same estate in Newbridge. The most recent death was of a young father a week ago.

Local independent councillor Paddy Kennedy described the deaths as “a very sad situation”. “Five is just unbelievable,” he said. “I wish I had an answer but I don’t.”

Paul Kelly, chief executive of suicide prevention agency Console, said it was aware of what appeared to be a cluster of deaths. He described the development as “very disturbing” but said it was not the first time this had happened. Mr Kelly said such events were traumatising not just for the families but for the whole community.

A number of young men died by suicide in a nearby town last year, he said, and there was also a cluster of deaths of young girls in north Kildare/Dublin in 2009.

Mr Kelly urged people with concerns about others to seek advice. “We’d say to people to be vigilant and mindful if they know someone who is having a tough time, and to watch out for signs they are in trouble.”

A recent report found suicide clusters, particularly among younger people, were becoming a worrying issue. The report by Prof Kevin Malone found up to 10 per cent of suicide deaths in Ireland may be part of a cluster.

A separate report by the National Suicide Research Foundation found 13 deaths in a 23km area of Co Cork over a three-month period in 2011. There were a further seven suicides in a neighbouring 28km zone. About 500 people take their lives in Ireland each year and the rate of youth suicide is among the highest in the EU. The number of Console’s 24-hour helpline is 1800-247247.