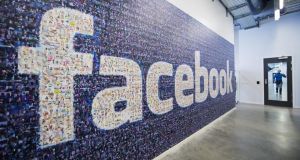 Facebook says it prohibits content deemed to be directly harmful but allows content that is offensive or controversial. “At Facebook we try to be a platform where people can share freely whilst still protecting the rights of others. We do not tolerate content which is directly harmful, for example bullying, but controversial or offensive behaviour is not necessarily against our rules,” a spokesman said. Photograph: Getty Images

Social networking site Facebook has no immediate plans to take down videos of people participating in the “neknomination” drinking game as they do not breach its rules or community standards.

Minister for Communications Pat Rabbitte yesterday called on Facebook to introduce a ban on pages promoting what he called the “stupid and silly phenomenon”, which has been linked to the death of a young man in Co Carlow at the weekend. Gardaí now believe the death of a 22-year-old man in Dublin in recent days is not linked to the activity, which involves people filming themselves drinking large quantities of alcohol, mainly spirits, posting the video online and then nominating someone else to do the same.

Mr Rabbitte demanded yesterday that Facebook act after charities and health professionals called for the game to be stopped.

Taoiseach Enda Kenny also appealed to young people yesterday to boycott the game as it “could end your life”.

It is understood Facebook is reviewing videos linked to the craze but that the posting of such material is not regarded by the company as a breach of its rules or “community standards”.

“At Facebook we try to be a platform where people can share freely whilst still protecting the rights of others. We do not tolerate content which is directly harmful, for example bullying, but controversial or offensive behaviour is not necessarily against our rules,” a spokesman said.

“We encourage people to report things to us which they feel breaks our rules so we can review and take action on a case by case basis. We also give people the ability to remove themselves from an uncomfortable conversation through tools such as untagging and blocking.”

Minister for Children Frances Fitzgerald confirmed her officials were in contact with the social networking site yesterday.

A spokeswoman said while Facebook had declined to take down pages and videos, they advised the Minister that they may intervene if “bullying or coercive behaviour” relating to “neknomination” is reported to it.

The Minister’s spokeswoman declined to say if Ms Fitzgerald was also seeking that Facebook take down any videos.

1 ‘It was pitch black’ - Rescued teenager describes night afloat with her cousin in Galway Bay
2 Aaron Brady, the man who said with pride he was a cop killer
3 Garda killer Aaron Brady will be almost 60 by time he leaves prison
4 Housing activists assist tenants to re-enter property following eviction
5 Mike Pence fretting as Kamala Harris shakes up Republicans
Real news has value SUBSCRIBE