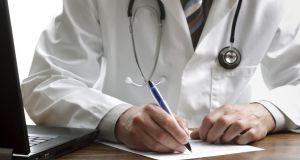 Sarcoma is a rare cancer felt as a lump that can affect fat, muscle, blood vessels, cartilage or bone.

Sarcoma is a very rare form of cancer, with only 150 to 200 cases a year in Ireland, but a specialist national treatment facility to deal with it is needed, a specialist in the condition has said.

Dr Charles Gillham, consultant radiation oncologist at St Luke’s Hospital in Dublin, said the best outcomes for people with sarcoma were among those treated in a large multidisciplinary centre.

“We are working with the National Cancer Control Programme to help develop such a service,” he said.

Sarcoma is a rare cancer felt as a lump that can affect fat, muscle, blood vessels, cartilage or bone. It has a large number of subtypes and can affect anybody of any age and in any part of the body, though it is more frequently seen in adults aged 30 to 50 years.

About half of all sarcomas develop in the thigh, buttock and groin area, with up to 15 per cent in an upper limb including the shoulder, arm and hand.

The majority of sarcomas arise in soft tissue and they represent less than 1 per cent of all cancers, with 30 to 40 people being diagnosed with the condition per million every year.

Though there may be predisposition to developing the condition, a genetic element is very rare, and smoking and alcohol do not seem to be associated with sarcoma, according to Dr Gillham. “The commonest cause of a lump is not sarcoma; this is a very unusual diagnosis,” he said.

Diagnosing sarcoma can be challenging because of its rarity and a GP might only meet someone with a sarcoma once in their working lifetime, Dr Gillham said. He said it was important to raise awareness among the public and GPs.

“If it is caught at a stage where it is confined to one area and it is operable, the prognosis is generally good, the chance of survival and cure relatively high,” he said.

“If a sarcoma isn’t diagnosed before it’s travelled it is generally incurable, so early diagnosis, as for all cancers, is very important.”

Dr Gillham said surgery was the cornerstone of treatment and radiotherapy or chemotherapy might not be required. “I can’t stress enough how important it is that we have a national facility or facilities to deal with the referrals that ought to be channelled through a much fewer number of systems than is currently happening,” he said.

An inaugural meeting of the national sarcoma group is due to take place in November. It will bring together experts from Ireland and abroad to help develop “streamlined pathways for these people to access the best-quality treatment”, Dr Gillham said.