Emma Mhic Mhathúna calls for HSE to be dismantled 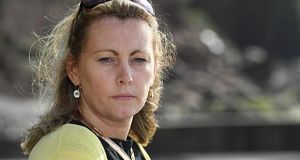 Emma Mhic Mhathúna: ‘Talk to cheap. When you’re back is to the wall you’ll say anything.’

Ms Mhic Mhathúna (37), a mother of five, is one of scores of Irish women who were wrongly told they had normal smear tests through the CervicalCheck screening programme.

Asked about the action taken by the Government in recent days to deal with the fallout from the controversy, Ms Mhic Mhathúna told Ryan Tubridy “talk is cheap”.

“They’re afraid of me because I’m telling it like it is,” she said. “They have cost me my life. I shouldn’t be dying. I’m dying because they tried to cut corners and they just didn’t listen.

“Talk to cheap. When you’re back is to the wall you’ll say anything. I’m glad they are listening to me. It’s unfortunate it’s taken my life for them to listen to me – the lives of my children – that’s made them stop.

“The public has been telling the Government for years that we’re not being taken care of. My children are just so sad. It’s great that everyone and the country is behind them, but it’s just not going to be the same.”

In terms of the future, she said she was heartened by the way Irish people have rallied together.

“I feel not as uneasy as I did since I did the [original] interview because I feel Ireland is becoming a family again,” she said. “We’re holding hands again and listening to the people, to the doctors and the nurses who are saying we need more staff or more machines.”

Ms Mhic Mhathúna also recounted the moment when her general practitioner (GP) told her the news of her diagnosis.

“I knew by her face,” she said. “I specifically asked to get them from my GP because I knew her. It was curtains. She just said that while I had energy I needed to get things in order for my children.”

Ms Mhic Mhathúna received a prolonged standing ovation from the audience at the end of her interview.