Ecstasy can cause a variety of adverse health effects in users 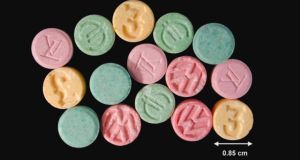 MDMA can reduce the pumping efficiency of the heart, which is of particular concern during periods of increased physical activity

The reasons why Ana Hick fell seriously ill on the street outside a nightclub and subsequently died have not been confirmed, but deaths in similar circumstances have in the past been linked to the use of ecstasy.

Also known as MDMA – an acronym for its chemical name 3,4-methylenedioxymethamphetamine – ecstasy is taken orally and its effects last approximately three to six hours.

One tablet typically contains between 60 and 120 milligrams of MDMA.

The potential positive effects of taking MDMA include feelings of mental stimulation, emotional warmth and increased empathy towards others. It also decreases anxiety.

These feelings are brought about by increases in the level of a neurotransmitter in the brain called 5HT, which plays a central role in determining whether we feel depressed or euphoric.

Heavy recreational use can cause cumulative damage to the nervous system, causing memory problems and impulsive behaviour.

Repeat users are prone to depression, panic attacks and hallucinations. A combination of the drug’s stimulant properties and a nightclub or rave environment can lead to vigorous physical activity for extended periods.

This can lead to hyperthermia – a rare adverse effect. A marked sudden rise in body temperature can rapidly lead to muscle breakdown, which can in turn result in kidney failure.

Separately, dehydration, a rise in blood pressure and heart failure may occur in susceptible individuals even after just a single dose.

MDMA can also reduce the pumping efficiency of the heart, which is of particular concern during periods of increased physical activity.

New MDMA derivatives and “copycat” drugs regularly appear on the black market. PMMA is sometimes sold as ecstasy (it is an amphetamine-like stimulant) but is more potent and dangerous side-effects can be triggered at lower dosages.

There is also the risk of ecstasy and related drugs being “cut” with other substances, some of which may themselves be dangerous chemicals. These include piperazine, an amphetamine-like substance, and ketamine, an anaesthetic agent and tranquilliser.