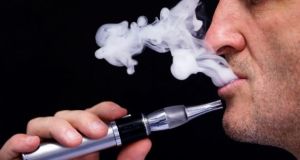 E-cigarettes are beneficial in encouraging smokers to quit, a report by Britain’s Royal College of Physicians (RCP) has said. Photograph: Regis Duvignau/Reuters

E-cigarettes are likely to bring benefits for public health and should be widely promoted to smokers to help them quit tobacco, Britain’s Royal College of Physicians (RCP) said on Thursday.

In a report likely to further fuel a debate over electronic cigarettes, the influential British doctors group stressed that tobacco smoking is both addictive and lethal, and concluded that e-cigarettes are “much safer than smoking”.

Experts at the College looked into the science, public policy, regulation and ethics surrounding e-cigarettes and made a series of conclusions about the devices including:

* E-cigarettes are not a “gateway to smoking” — in the UK, use of e-cigarettes are used mostly by those who are already using, or have used, tobacco, they said.

* There is no evidence that e-cigarettes result in normalisation of smoking.

* The devices are beneficial in encouraging smokers to quit.

There is a possibility that the devices may result in some long-term harm because of the inhalation of the ingredients other than nicotine — but the harm that could be caused is substantially smaller than that caused by smoking, the authors said.

While there is a need for “sensible” regulation of the devices, regulation should not significantly inhibit the development and use of the products, they add.

Professor John Britton, chair of the RCP’s Tobacco Advisory Group, said: “The growing use of electronic cigarettes as a substitute for tobacco smoking has been a topic of great controversy, with much speculation over their potential risks and benefits.

“This report lays to rest almost all of the concerns over these products, and concludes that, with sensible regulation, electronic cigarettes have the potential to make a major contribution towards preventing the premature death, disease and social inequalities in health that smoking currently causes in the UK. Smokers should be reassured that these products can help them quit all tobacco use forever.”

RCP president Professor Jane Dacre added: “With careful management and proportionate regulation, harm reduction provides an opportunity to improve the lives of millions of people. It is an opportunity that, with care, we should take.”

Commenting on the report, Cancer Research UK’s director of prevention Alison Cox said: “We believe e-cigarettes have real promise in helping to reduce the huge death toll from tobacco in the UK.

“This important report is an accurate summary of the latest scientific evidence on e-cigarettes and will help dispel the increasingly common misconception that they’re as harmful as smoking. They’re not.

“Tobacco kills more than 100,000 people in the UK every year, we should grasp every opportunity to encourage as many people as possible to stop smoking for good.”

Duncan Selbie, chief executive at Public Health England, added: “The evidence is clear; vaping is much less harmful to health than smoking, and this report further highlights the important role of e-cigarettes in reducing the deadly harms smoking causes.

“The best thing a smoker can do, for themselves and those around them, is to quit completely, now and forever. E-cigarettes are the most popular quitting aid in England and local stop smoking services are the most effective route to giving up, we encourage smokers to combine these, giving them an extremely good chance of quitting smoking successfully.”