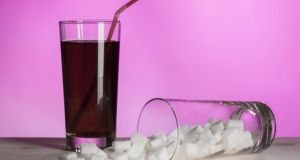 Doctors have demanded a 20 per cent tax hike on sugar sweetened drinks in the upcoming budget to tackle the obesity epidemic.

The Royal College of Physicians of Ireland (RCPI) also called for a review of how sugary drinks are promoted and the effect their consumption has, particularly by children.

Professor Donal O’Shea warned they provide no nutritional benefits but are linked with weight gain.

“With one in four Irish schoolchildren classified as overweight or obese, we have an epidemic and the Government must take action,” said the hospital consultant.

“There is widespread agreement among health professionals, now backed by a convincing body of evidence, that sugar sweetened drinks, including sports drinks, and their pattern of consumption are significant factors in weight gain and obesity, especially among children.

“Despite this, sugar sweetened drinks remain popular in Ireland, and are heavily promoted.

“Sports personalities and organisations are often used by industry to market their sports drinks.

“This is certainly something that I believe should be discouraged in the future.”

The RCPI policy group on obesity said research indicates that the obese children of today will become the obese adults of tomorrow, costing the state more than a billion euro in healthcare costs and loss of productivity due to illness.

It said public health must be prioritised over commercial gains and backed the Irish Heart Foundation which also called on Minister for Finance Michael Noonan to consider a tax hike on October 15th.

“There is now a consensus across a broad spectrum of health professionals that a tax on sugar sweetened drinks is needed as an important step in addressing the challenge of obesity in Ireland,” she added.

“A Health Impact Assessment commissioned by the Department of Health in 2012 estimated that a 10 per cent tax on sugar sweetened drinks would reduce the number of obese adults in Ireland by 10,000.

“The introduction of the tax would go some way towards reducing direct and indirect costs of obesity, and would generate additional much-needed revenue for prevention.” (PA)