Ireland is beginning to suppress the spread of coronavirus, the Government’s public health advisers have said. Video: RTÉ 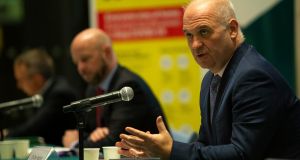 Ireland is beginning to suppress the spread of coronavirus, the Government’s public health advisers said last night, after latest figures confirmed a downward trend in infections.

While the National Public Health Emergency Team warned against complacency, it confirmed the tide appears to have turned after months of growth in the spread of the virus.

“This is the first time in three months that I’ve been able to report positive indications that we are starting to suppress transmission of the virus,” Prof Philip Nolan said at a press conference in the Department of Health.

“When we achieve this sort of suppression, the important thing is to make it last,” he said.

Several senior Government figures pointed out the stabilisation and reduction in the number of daily cases stems from the restrictions – including the ban on home visits – introduced before the lockdown. Prof Nolan confirmed this view, saying that the reversal currently being seen in the growth of the virus was down to the introduction of a ban on households mixing, rather than the Level 3 restrictions that were in place beforehand, or the Level 5 restrictions introduced on October 21st.

The effect of Level 5 will not be reflected in the number of cases being diagnosed for another week or so, he said. Once those measures are reflected in the case numbers, “we’ll have a much clearer picture of are we on track to be where we need to be at the end of the six-week period”.

Weekly public opinion research conducted for the Department of Health also shows that there has been a sharp change in public attitudes in the past fortnight. Two weeks ago almost half (49 per cent) of all adults said that they believed the worst of the crisis was still ahead of us, but since then there has been a sharp drop in this pessimistic view, and now just over a third (34 per cent) hold this view.

At the same time the number of people who believe the worst of the virus is “happening now” has risen from 35 per cent to 43 per cent. The numbers of those who say the worst is behind us has risen in the same period from 8 to 12 per cent.

Several other indicators in the research also suggest growing levels of optimism among the public.

Attention is now turning within Government to how it should manage the exit from the lockdown, scheduled for the start of December. Though one Minister privately suggested that the falling case numbers could mean an earlier end of the restrictions, a number of senior sources rejected this idea.

However, Ministers and public health officials are likely to grapple in the coming weeks with planning an exit strategy that will prevent a sudden resurgence in virus numbers, officials said.

While Taoiseach Micheál Martin declined this week to give travel advice, three senior sources said yesterday they believe it is very unlikely that quarantine requirements on international travellers will be lifted over the Christmas period. One source said that while decisions had not been made, it was expected the travel advice would be “not to fly into Ireland”.