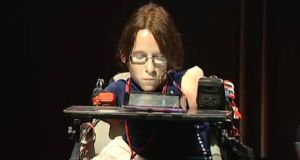 Joanne O’Riordan (17) from Millstreet, Co Cork: was born without limbs as a result of total amelia syndrome, a congenital disorder which affects only a handful of people worldwide.

An Irish teenager who challenged technology innovators to build a robot to help her cope with a rare form of disability has received a €50,000 donation from the United Nations.

Joanne O’Riordan (17) was born without limbs as a result of total amelia syndrome, a congenital disorder which affects only a handful of people worldwide.

Last year she addressed members of the international hi-tech sector at the UN in New York. She had been chosen by the organisation’s Telecommunication Union to speak at their ‘Girls in Technology’ conference.

She outlined the importance of technology in her everyday life and challenged those present to build her a robot. “Yes, that’s right a robot,” she said. “It sounds almost insane but as a child and even today I’ve always wanted and would love to have a robot. The main thing the robot would be doing is picking up the objects I drop such as a pen, knife, fork, and or my phone.”

Trinity College Dublin conducted some research with Joanne and decided that the project was feasible. Earlier this summer the UN contacted the O’Riordan family to inform them it would be offering the donation.

The 17-year-old from Millstreet, Co Cork, said she has “always wanted and dreamed of having a robot… and I’m glad that the UN believed in my dream. I never expected that the world would react in the way they did to my speech.”

Her brother Steven said although the donation is “great”, it would not cover the full costs of the ideal sort of robot for Joanne. “You would be looking at something like €100,000 to get a proper robot,” he said.

He added that the UN provided the money as a “starting point”. The organisation “got the ball rolling”, and now the family will see whether interest from companies in the private sector will help secure further funding.

He expressed disappointment that the Government failed to show further interest after the flurry of publicity following his sister’s UN speech quietened down. “You would imagine that the Government would be getting behind this,” he said, adding that the project tallies with their supposed focus on technology and innovation.

The Massachusetts Institute of Technology and Boston College have expressed interested in the robot and Mr O’Riordan, who will screen a documentary has had been making about his sister in October, said the family hopes to have enough funding in place to begin development early next year.