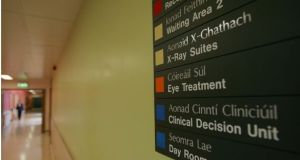 One man is still in critical condition at Cork University Hospital following a house party in Cork where “N-bombs” were being taken. File photograph: Bryan O’Brien/The Irish Times

The drug that has left an 18-year-old man in a critical condition at Cork University Hospital has only been encountered by the State’s Forensic Science Laboratory a handful of times.

A total of six people were hospitalised after consuming drugs at a house party on Green Street in Cork City on Monday. Three remain in hospital in a stable condition while two have been discharged.

Despite reports that the drug involved was the uncontrolled substance 2C-B, tests carried out by the Forensic Science Laboratory at Garda Headquarters have revealed the drug in question to be 25I-NBOMe, which carries the street name “N-bomb”.

Dr Audrey O’Donnell, a forensic scientist at the laboratory, carried out tests on two samples of white powder recovered from the house.

“They have the street name N-bombs,” she told The Irish Times. “They are stimulants and they have hallucinogenic effects. They are an extremely potent compound. You only need a very small amount of this substance to give an effect in the brain.”

The drug is a controlled substance under the Misuse of Drugs Act, and Dr O’Donnell said it has been linked with hospitalisations and deaths in other jurisdictions.

This was just the second time it has been encountered by the laboratory in powder form, in which it is more difficult for users to gauge dosage.

“We have seen it in the laboratory about six times since 2010,” she said. “On four previous occasions it was on blotter paper. Old LSD usually came in perforated paper form and this drug normally presented to the laboratory in that form.

“We’ve had two incidences of it in a white powder and this case is one of those incidences.”

In terms of whether the drug may be rising in popularity, Dr O’Donnell said it is “rarely seen” by the laboratory but that individuals may be experimenting with new substances.

“It’s a new drug,” she said. “It’s one of these new psychoactive substances. We rarely see it, but I think it’s now bought over the internet, so essentially we don’t know what we’re going to get in. It really depends on what the Garda and customs officials seize.”

Dr O’Donnell said 2C-B was “a very potent drug as well” and that both drugs involve similar types of compound, but the N-bomb “would be of the order of microgram levels”.

“A tiny amount – an amount you can barely see – would have an effect on the brain,” she said. “The well-known drugs like cocaine or other white powders, you would have to take more of the drug to take effect.”

Gardaí arrested a 29-year-old man in relation to the matter under Section 15 of the Misuse of Drugs Act in the French’s Quay area of Cork City at about 4pm on Wednesday.

He was brought to the Bridewell Garda station where he was questioned for more than 10 hours before being released without charge. A file is to be prepared for the DPP.

Anyone with concerns in relation to drug use can contact the confidential HSE Drugs & Alcohol Helpline at freephone 1800 459 459 or email helpline@hse.ie. Information can also be accessed at www.drugs.ie.