Paul Kelly, wife and son spent on items such as groceries, designer clothes and foreign trips 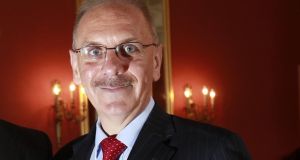 The founder of suicide prevention charity Console, his wife and son ran up credit card bills of almost €500,000 on items such as groceries, designer clothes and foreign trips over a three-year period, according to a HSE audit.

Paul Kelly, his wife Patricia and their son Tim, benefitted by almost €500,000 in salaries and cars over the period from 2012 to 2014, the audit has also established.

Amongst the items the credit cards were used for, were large unvouched cash withdrawals, trips to Australia, New Zealand, Singapore and other destinations, designer clothing in outlets such as Ralph Lauren and Hugo Boss, dining out, rugby world cup tickets and dental work.

Between them Paul, Patricia and Tim Kelly used 11 credit cards over the three year period.

Paul Kelly resigned as ceo of the charity last Thursday following controversy over funds governance at the charity.

The board of Console said it had accepted his decision to step down and announced the appointment of two outsiders to review the issues raised in the HSE audit and an RTÉ investigation of the charity.

Details of the draft HSE audit of the charity were revealed on RTÉ Investigates on Tuesday evening.

Over the period, Paul Kelly received consultancy payments of €218,586, plus a 2009 Mercedes CLS costing €30,600 (fully expensed) and four credit cards, the audit showed.

The largest single expenditure item on these credit cards was cash withdrawals of €87,026. Of these, Paul Kelly withdrew €66,296. There was no documentation to identify how these cash sums were used.

Spending of €8,377 on clothing is also recorded, including designer names such as Ralph Lauren, Hugo Boss, Moss Bros, Bershka and Coast.

Paul Kelly has denied allegations of mismanagement and poor governance.