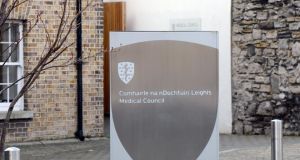 A Medical Council Fitness to Practise Committee has begun hearing closing arguments in the case of a Waterford-based dermatologist who is facing more than 100 allegations of professional misconduct and poor professional performance.

The case against Dr Adam Jacobus Smith of the Whitfield Clinic, Waterford is one of the longest-running to come before the Fitness to Practise Committee, sitting for some 30 days since April last year.

At this morning’s hearing Gabriel Gavigan SC for Dr Smith submitted the legal Act which established the standard of Poor Professional Performance did not come into effect until July 2008. As such he said a number of the allegations prior to that date, could not be considered as evidence of poor professional performance.

Mr Gavigan said a further allegation that Dr Smith failed to arrange for a biopsy for a patient in September 2008, did not amount to poor professional performance. Mr Gavigan said Dr Smith had given evidence that the symptoms did not warrant a biopsy at that time, and he had known he would be seeing the patient again, in the immediate future. Mr Gavigan said the expert testimony given to the hearing had supported the view that this did not amount to poor professional performance.

Solicitor for the Medical Council J P McDowell of McDowell Purcell Solicitors told the inquiry it was accepted that matters arising before July 3rd, 2008 could not be evidence of poor professional performance. But he argued there was sufficient other material before the inquiry on which to make findings against Dr Smith.

The hearing is continuing.