CervicalCheck chief did not want some women told of false results

Tánaiste Simon Coveney has apologised to Vicky Phelan and her family, the 43-year-old mother of two was incorrectly given the all-clear from a smear test taken in 2011. 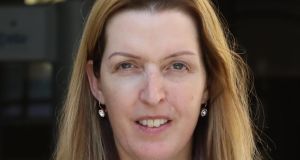 Vicky Phelan from Annacotty, Co Limerick, was not told about an incorrect 2011 smear test until September 2017, despite a 2014 audit by CervicalCheck showing that the test was wrong. Photograph: Collins Courts

The clinical director of the national cervical cancer screening programme advised a Limerick gynaecologist to file some audited test results rather than to tell women in certain cases that all-clear smear tests they had received years earlier were wrong.

Dr Gráinne Flannelly, clinical director of CervicalCheck, told gynaecologist Dr Kevin Hickey in an email in July 2017 that several women in the mid-west region should not be told about the false negative tests discovered in an audit after he wrote to her to confirm that she felt some women with cervical cancer should not be informed about them.

The private correspondence was submitted in the High Court case taken by Vicky Phelan, a 43-year-old mother of two with terminal cancer from Annacotty, Co Limerick who was not told about an incorrect 2011 smear test until September 2017, despite a 2014 audit by CervicalCheck showing that the test was wrong.

The records emerged after Dr Flannelly publicly acknowledged that she could not say for sure that all of the 206 women who missed early treatment for cervical cancer had been made aware of the situation.

Dr Hickey wrote to Dr Flannelly on June 20th, 2017 referring to a list of patients with cervical cancer noting that in three highlighted cases the women should be told about the false smear test results after a 2014 review.

“There were other ladies where the review process has altered the original smear report and it looks from your notes that you have felt that these should be filed in the patients’ notes and that no review is necessary,” Dr Hickey wrote to her at the National Maternity Hospital, Holles Street in Dublin.

“I just wanted to confirm that you are happy with this whole process centrally from the Cervical Screening Unit given that it looks that some of the review smears were different from the original.”

Dr Flannelly replied on July 7th, 2017 in an email with the subject line “clarification”.

“Yes – a balance needs to be struck in deciding who needs a formal communication of the outcome of the audit. The possibility of resultant harm is crucial,” she wrote.

In cases where women have not had cancer or who have “local and fertility-sparing surgery”, Dr Hickey should “simply file” the audited test results in the patients’ medical notes, Dr Flannelly wrote.

“The concept of delay is important,” she said.

“I based my judgment on the medical information available to me and using the same criteria I use in my own practice when dealing with these cases. Only three of the women merited a closeout meeting using these criteria,” Dr Flannelly wrote.

On August 8th, 2017, after being told by Dr Hickey that he had taken it upon himself to inform all the affected women, Dr Flannelly wrote to him again, noting his decision and saying that this “underscores the value of the local clinician reviewing the clinical context”.

“The advice I gave was based on the limited information available to me and was given as an honest assessment of what seemed to be the best way to proceed with these cases,” she said.

“It is right and fitting that your own clinical judgment should take precedence.”

Yesterday, Minister for Health Simon Harris appointed a senior team of experts to examine the cases of the 206 women who missed early treatment for cervical cancer and to assess how many were not made aware of the delay in diagnosis.

The appointments followed Mr Harris’s failure to declare confidence in the leadership of the programme.

A HSE spokeswoman said Prof Flannelly would be “continuing in her role” and was “directly involved” in the process to provide assurance around the communications with the 206 women whose cases were under review.

Asked about doctors using their “judgment” on whether to inform patients of wrong test results, the spokeswoman said the “practice was deemed to be appropriate and is in line with the practice in the UK for the communication of cancer audit reviews”.