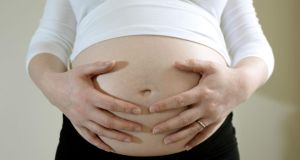 The study is a meta-analysis of 25 previously published papers on the links between Caesarean sections and conditions such as autism and ADHD. Photograph: Andrew Matthews/PA Wire

Delivery by Caesarean section is associated with an increased risk of autism in childhood, according to a study by Irish researchers.

Children born by Caesarean section have a 23 per cent greater risk of developing autism spectrum disorder (ASD), the study to be published shortly in the Journal of Child Psychology and Psychiatry suggests.

The researchers, led by Eileen Curran of University College Cork, also look at links between Caesareans and attention deficit and hyperactivity disorder (ADHD) but the findings were unclear.

The authors urge caution in interpreting their results and say more research is urgently needed to explore the risks involved. The study is a meta-analysis of 25 previously published papers on the links between Caesarean sections and conditions such as autism and ADHD. Some showed the risk of autism after a Caesarean increased by as much as 40 per cent.

The study says it is unclear what is driving this association and whether it is causal. Children born by Caesarean section have different gut flora than those born by normal delivery, and some scientists believe this may be a factor in psychological development.

However, the authors point out the underlying reasons for a Caesarean may lead to the increased risk of autism, not the Caesarean per se.

Worldwide, an estimated 0.62 per cent of children are diagnosed with ASD, and 5.3 per cent with ADHD. The prevalence of autism has increased twentyfold since the 1980s, a rate that suggests factors other than improved detection and diagnosis.

The study cites worldwide Caesarean rates of over 20 per cent. Rates in Irish hospitals are increasing and range up to 38 per cent.

Coronavirus: 70 extra tracers being recruited a week to clear backlog