Beaumont turns away patients in urgent need of brain surgery

Refusal at neurosurgical centre due to lack of beds and theatre access, says clinical director 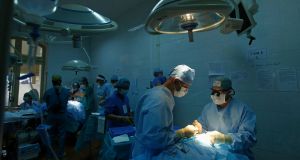 The centre in Beaumont Hospital in Dublin had no beds for nine patients with malignant brain tumours last Friday. File photograph: Reuters

Patients urgently requiring brain surgery are being turned away from the State’s national neurosurgical centre because of a lack of beds and theatre access, according to the head of the unit.

The centre in Beaumont Hospital in Dublin had no beds for nine patients with malignant brain tumours last Friday who were awaiting transfer from other hospitals, according to Dr Mohsen Javadpour, clinical director of the centre.

In addition, “we have many patients at home on the waiting list with brain tumours that are causing deterioration in function (eg vision), or patients with brain aneurysms which can rupture at any time and cause death or disability,” Dr Javadpour says in an internal memo seen by The Irish Times.

Consultants were living with these concerns on a daily basis, he says. “This is not ‘shroud waving’ as is sometime referred to by politicians; it is a genuine concern for the patients who have illnesses which put them at real risk of a life-threatening event or neurological disability for the rest of their lives.”

His remarks appear in an email response to a hospital administrator, who contacted Dr Javadpour about letters and representations from politicians to the hospital seeking admission dates for constituents.

Dr Javadpour says consultants must admit patients according to clinical priority and must not be “pressurised” by TDs to admit one patient ahead of others. “This is dangerous and would be against the medical code of practice, and would be in breach of medical council regulations.”

In the past, the centre tried to give admission dates to patients but emergencies or a lack of beds or theatre space led to cancellations. “There is no point in giving an admission date to patients when we know we cannot deliver it.”