Head of RCSI in charge as €120,000 cited as not enough to attract suitable candidate 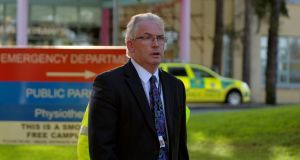 Tony O’Brien: The HSE director described an increase of 160 in staff numbers at Beaumont hospital last year as “not affordable”. Photograph: Alan Betson / The Irish Times

The performance of one of the State’s largest hospitals, Beaumont in Dublin, has been described as a matter of serious concern by the head of the Health Service Executive.

Financial instability, an unaffordable rise in staff numbers and lengthening waiting times at the northside hospital are singled out by HSE director general Tony O’Brien for specific criticism. His remarks are made in correspondence with the board of Beaumont in a protracted row over the appointment of a new chief executive.

The HSE sought to impose the interim appointment of the head of the Royal College of Surgeons in Ireland hospital group, Ian Carter, but this was resisted by the hospital for some months. The dispute was parked after both sides agreed it would be impossible to find a permanent chief executive for the €120,000 a year salary on offer. Mr Carter has taken on the additional job of managing Beaumont for no additional payment.

In a letter to Beaumont chairwoman Ann Fitzgerald last May, Mr O’Brien described an increase of 160 in staff numbers at the hospital last year as “not affordable”. The hospital ended the year €13 million in the red, before supplementary funding.

Trolley numbers in the emergency departments increased by up to 11 per cent last spring compared to the previous year, he pointed out, and there were concerns about the way appointments were organised.

“Without the effective functioning of Beaumont Hospital, the RCSI Hospital Group cannot be effective,” he warned.

Ms Fitzgerald wrote to Mr O’Brien outlining measures taken to improve processes but admitted overall performance was “very much a work in progress”. She blamed growing demand and limited capacity for the problems faced by patients in accessing services.

Beaumont has one of the highest cohorts of older people living nearby, a deficit of long-term beds and is facing a “phenomenal” growth in demand for cancer services, she told Mr O’Brien.

Last March, the HSE proposed outgoing chief executive Liam Duffy, who was to retire in June, be replaced on a pro tem basis by Mr Carter.

The proposal provoked alarm on the board of the hospital, which argued on legal advice that the HSE had no legal right to impose a chief executive and claimed it meant the group would “effectively take control of Beaumont”.

Ms Fitzgerald said the appointment of Mr Carter to a dual role would involve “conflict issues” as he would be acting on both sides on matters relating to funding, compliance and the hospital’s independence.

She maintained Beaumont is a voluntary hospital but Mr O’Brien countered that it is entirely owned and funded by the State, through the Minister for Health. After further exchanges, the hospital agreed to Mr Carter’s temporary appointment and the HSE agreed to advertise the post in September.

However, the Public Appointments Commission told Beaumont the €120,000 salary would not attract any “viable” applicants and refused to become involved in “a futile effort”, Ms Fitzgerald told the HSE boss.

As a result, the hospital agreed to allow the temporary arrangement to continue to September 2017.