All welcome as deaf village opens its doors 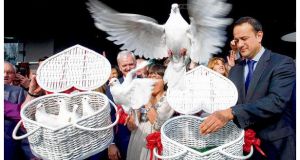 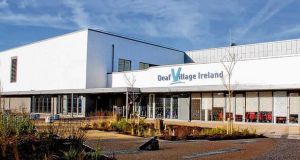 The village is open to the local community - the support of which will be essential to the facility's long-term viability.

For a state-of-the-art sports and social complex, the choice of name is a bold one. Yet there it is, in huge letters above the entrance: Deaf Village Ireland. Located off the Ratoath Road in Cabra, Dublin, it’s very much open to the local community and, indeed, that patronage will be essential to the facility’s long-term viability.

Just before it opened for business at the end of last month, the facility’s developers, the Catholic Institute for Deaf People (CIDP), ran a naming competition within the deaf community in a bid to come up with an alternative – perhaps more neutral – name for the €15 million facility.

But the “deaf village” tag clearly stuck, and Deaf Village Ireland (DVI) it was. It suggests a new confidence among members of the signing deaf community, and implies that they are very much in charge here.

But are they? According to Liam O’Dwyer, the chief executive of the CIDP, there are currently two boards of management: a subsidiary board of the CIDP that was set up to build the centre and which runs the sports centre, and a newer, independent board that runs the whole of DVI.

The majority of seats on the independent board are filled by deaf people, while the subsidiary CIDP board is 50:50 deaf and hearing. The aim is that the independent board will eventually take over the running of everything, including the sports centre. “The strategy of the DVI was to enable and encourage the deaf community to manage its own business,” he said.

Those who work for different deaf organisations now based in the DVI agree that the deaf community has been given substantially more input and control over the facility, and it marks a very significant change to allowing the development to become a truly community-led enterprise.

He credits the appointment of Fr Michael Cullen as chairman in 2006 as the start of the change. Some independent research into the problems with the organisation was commissioned, for which the overwhelming feedback from the deaf community was scathing.

Stanley believes there is still some way to go before CIDP hands over complete responsibility, but Sylvia Nolan, the manager of DVI, says it’s unrealistic to expect so much change overnight.

“It’s hard for them to step back, because they have done a lot,” she says. “I can see it myself, as I am working here all the time. It will take time. At the same time, I have to applaud the CIDP because they are stepping back and letting go. It’s slowly, but surely. But it’s difficult for them, and to achieve a balance as well.”

On the other hand, some in the community have privately voiced concerns about what they see as an overemphasis on the sports centre to the detriment of the rest of the facility. But so far, it seems to be doing well to attract members from the local community – 1,600 people have signed up to the sports centre so far, the vast majority of whom are hearing.

So while the village is set to be a welcoming, highly inclusive place, there should be no question about who is running things, says Tracey Trainor, who is deaf and works in the Irish Deaf Society offices in DVI. “Deaf Village Ireland is open to everyone, but it’s deaf-led and deaf-run. Irish Sign Language will be the first language here.”

Dr John Bosco Conama, assistant professor and lecturer at the Centre for Deaf Studies in Trinity College, concedes that it’s early days for the new deaf-led regime, but that they need to grasp the opportunity to develop their confidence and leadership skills in order to achieve a reasonable balance between remaining financially sustainable and providing much-needed resources to the deaf community.

He hopes that much of the value of DVI will be in celebrating diversity in Irish society by promoting awareness of the deaf community, its language and culture.

But he adds that also it would provide a safe haven from “campaigns of misinformation and repression against Irish Sign Language” over the past few decades and which he says are still running today.

“We are constantly told to recognise and respect diversity in cultures and religions, but I have not seen this being extended to the deaf community,” he says.

Living in a world without sound

What is it like to live in a world without sound, not to be able to hear human voices, traffic or bird song? The reality of being a deaf person is the subject of a deaf awareness training programme in schools which will be held next week.

The programme is the idea of the Irish Deaf Society chief executive John Mangan who has full hearing. He said before he joined the society he realised how little he and others who can hear know about the challenges facing deaf people. The programme, supported by Hidden Hearing, will go to five schools in the Leinster area next week.

Children will be reminded of the difficulties of learning to read and write when you cannot hear. Many people who are deaf from birth have only the literacy levels of an eight or nine year old.

They will also learn about the different types of deafness, the variety of deaf sports which include the deaf Olympics, and Irish sign language (ISL).

“I always regard deafness as a silent disability if that is the right term to use,” said Mr Mangan. “The thinking is that if we begin to speak to children and they understand it, they can bring the message home. Children often have a better understanding of the difficulties that deaf people face than adults do.”