Agency a ‘once in a lifetime’ chance to reform child welfare services, says Taoiseach 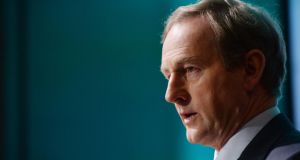 Enda Kenny at the launch of the Child and Family Agency in Dublin Castle. He said the reforms would bring new cohesion and convictions to the task of protecting young people at risk. Photograph: Alan Betson/The Irish Times

Taoiseach Enda Kenny has said the new Child and Family Agency provides a “once in a lifetime opportunity” to reform child protection and welfare services.

In all, some 4,000 people have transferred to the organisation, which will have a budget of about €600 million.

The creation of the agency follows a number of highly critical reports into how children were failed by the system, often as a result of poor co-operation between State agencies.

The agency has taken over responsibility from the Health Service Executive for child welfare and protection, pre- school inspection and domestic violence services.

However, key services such as public health nursing and children’s mental health have not transferred to the agency.

Children’s advocates have also raised concern at whether there are sufficient staff available to meet the growing volume of referrals regarding young people at risk of abuse or neglect.

Cohesion
At the formal launch of the agency in Dublin Castle yesterday, Mr Kenny said the reforms would bring new cohesion and convictions to the task of protecting young people at risk.

The appointment of the first full Cabinet minister with responsibility for children and new laws on mandatory reporting of child abuse were signs of the Government’s determination to tackles these issues, he said.

Minister for Children Frances Fitzgerald said the agency will be the first time that child and family services will be the focus of a single State body.

“For too long our flawed approach treated child and family services like an adjunct of another agency, as an afterthought. But not any more,” she said.

Gordon Jeyes, the chief executive of the agency, said the organisation will be a “ferocious corporate parent”, demanding the best for children.

“This will be an agency that has the agility and the freedom and flexibility to engage with individual families on a practical level and the capacity to react to changing circumstances,” he said.

He also confirmed plans for a new graduate placement scheme that could see many vacancies filled by students who have completed social work courses.

These year-long placements would be open to all third-level graduates from the main social work courses and would “bridge the gap between theory and practice”.

“The scheme would see young graduates place in social work departments, honing their skills in order that they fully understand the complex challenges facing families before they eventually apply to join our workforce,” Mr Jeyes said.

Broad welcome
The new agency has met with a broad welcome, although campaigners have warned that it will require staffing and co-ordination if it is to reach its full potential.

Prof Pat Donal, of NUI Galway and Ireland’s Unesco chair of children and civic engagement, welcomed the clear lines of accountability within the new organisation but added that the pressures on families caused by the economic downturn will pose stiff challenges over the coming years.

Noel Howard, of Social Care Ireland, also welcomed the new agency but said co-operation with services outside it will pose a major challenge.

“Not all the services that should be in it are there. The danger is each department or grouping will fight for its own interests, rather than those of children,” he said.