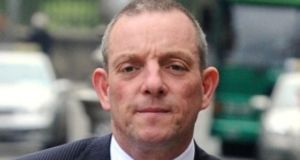 Fine Gael’s Jerry Buttimer, chairman of the Oireachtas health committee, which is today holding its second day of hearings on the Heads of the Protection of Life during Pregnancy Bill 2013. Photograph: Dave Meehan/The Irish Times

Legislation to allow abortions for suicidal women could actually place more young males at risk of suicide, according to a consultant psychiatrist.

Professor Kevin Malone, UCD professor of psychiatry and co-founder of the charity Turn The Tide of Suicide, told the Oireachtas health committee, that by highlighting suicide the State could be seen as legitimising it, sending the wrong signal to young men who were most at risk of suicide.

Overall he said the effect of the legislation might be greater loss of life than life-saving. Prof Malone said there were more than 12,000 cases every year of people presenting at A & E for suicidal behaviour.

He asked how mental health literacy would be taught in schools explaining that suicidality is legitimised for women in certain circumstances but not for young men in any circumstance. He pointed out that the risk of suicide among women was two in 1,000,000 but 350 in every 1,000,000 for young men.

Consultant psychiatrist Dr Seán Ó’Domhnaill warned that the legislation would turn doctors into abortionists. Abortion had no role in modern medicine, he said and termination was a medieval response to crisis pregnancies.

Dr Ó’Domhnaill said: “ We outlawed the death penalty. The only person at risk to have death warrant is the unborn child.”

“ There was no situation when a pregnant woman presidents with suicidal ideation, where the risk of suicide could only be averted by termination,” she said. She said the appropriate treatment for any suicidal patient was to ensure their safety either at home or in hospital, to offer psychological support and counselling and psychotropic medication.

There was no time limit set for termination in the legislation and there is evidence that women who have late abortions have worse mental health outcomes, she added.

Dr Bernie McCabe, consultant psychiatrist at Navan hospital said the test that there had to be a real and substantial risk to the life of the woman that could only be avoided by abortion could not be met because suicide could not be predicted, even in those with mental illness.

She said no research has been carried out on those who are suicidal simply due to the pregnancy. Yet the Government was proceeding as if such evidence exists, she added.