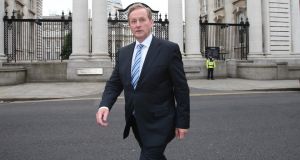 Taoiseach Enda Kenny: revealed yesterday that opponents of the abortion legislation have branded him a murderer and sent plastic foetuses and letters written in blood. Photograph: Niall Carson/PA Wire

Minister for Health James Reilly said the Protection of Life during Pregnancy Bill will clarify the law for women who need access terminations and for the medical practitioners who have to deliver them.

The Bill was published by the Government shortly after midnight.

It contains some significant changes from the draft heads published in April.

- No medical practitioner will be obliged to carry out a termination if they have a conscientious objection to the procedure, but the outline provision in the heads stating that “no institution, organisation or third party shall refuse to provide a lawful termination” has been removed

- It will be an “offence to intentionally destroy unborn human life”, with those guilty liable to a fine or imprisonment for up to 14 years. This is a tighter definition than in the draft heads, which stated that “it shall be an offence for a person to do any act with the intent to destroy unborn human life”, which may have included the pregnant woman

Protection of Life During Pregnancy Bill 2013

- General practitioners will only be consulted “with the pregnant woman‘s agreement”, which was not specified in the draft heads

- The number of hospitals where terminations can be performed has been widened from 19 to 25 to include the major teaching hospitals providing intensive care services (the final list of appropriate institutions in the Bill excludes the Rotunda Hospital in Dublin, which the Department of Health has confirmed is an error).

Speaking on RTE Radio this morning, Dr Reilly said the Government had reflected “long and hard” on reservations expressed by some psychologists that abortion was not an appropriate treatment for suicidal ideation, but added a law must be in place in the “rare occasion” that it would be needed, in accordance with the Supreme Court ruling on the X case and the ABC judgement from the European Court of Human Rights.

Dr Reilly said no medical institution would be able to refuse to perform an abortion if her life was in danger.

“In those circumstances we see absolutely no indication or room for an institution to have a conscientious objection.”

Tánaiste Eamon Gilmore last night welcomed the publication of the Bill, saying it would give statutory effect to the decision of the Supreme Court in the X case.

“If this Bill is passed, every one of the tens of thousands of pregnant women who are admitted to hospital every year will know that any action which may be needed to save her life in an emergency will be taken,” he said.

Speaking this lunchtime, Taoiseach Enda Kenny said the Bill would bring “clarity and legal certainty to the constitutional rights which women have in this country”.

An Irish Times/Ipsos MRBI poll published today shows there is overwhelming public support for the Government’s proposed legislation on abortion, with 75 per cent of respondents saying they were in favour of permitting abortion where a mother’s life is in danger.

There were clear signs last night that the newly-agreed abortion legislation will not appease some of the doubters in Fine Gael but there was confidence in Cabinet that the Bill will be backed by the overwhelming majority of the party.

There remains anticipation in Government circles that new measures such as giving the Minister for Health the right to direct the suspension of services under the law will give comfort to some naysayers.

The hope within the Coalition is that this would convince some of the doubters that the new law would not open the “floodgates” to abortion on demand.